Bags are something that's often overlooked. They can cost an incredible amount of money - hundreds of dollars - and spending that sort of money on something that doesn't actually capture an image can seem ...pointless?

But I'm a great believer in having a good bag to store your stuff in; it really makes a difference for both storage and transportation. The problem is finding a good compromise on protection, quality and price. Part of the equation is your usage; if you're taking the gear out everyday shooting, you'll need something much stronger and sturdier than something used to store equipment in a studio or that is only occasionally transported.

I have a couple of inexpensive bags for lenses and SLR cameras which are almost identical in capacity and price. I would recommend these for storage and light transportation/use.

The AmazonBasics Backpack for SLR Cameras and Accessories-Black is currently $35.96 while the Canon Deluxe Photo Backpack 200EG for Canon EOS SLR Cameras (Black with Green Accent) costs $39.95. There's practically no difference in terms of size and construction. They aren't exactly the same, but they're certainly very similar. 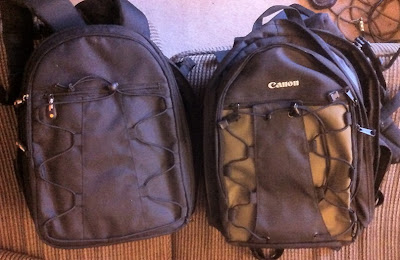 For storing lenses (and an SLR camera) they are a great options, and for transporting, they are good too. I wouldn't rate them for heavy use; if you're a pro moving gear around every day, you'll want to get something sturdier and they certainly don't provide enough protection for checking on a flight or anything like that. But for the casual, careful user, they should do the job just fine.

Note that these bags aren't huge, but I'd prefer two medium sized bags, than one really large bag. These I can easily carry one in each hand, whereas a large bag would require two hands, or would need to be put on a cart. 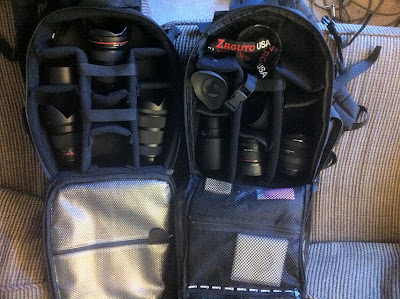 If I was buying another, I'd actually get the Canon one, as it's withstood my use more than the Amazon Basics one. One of the plastic clips on the shoulder strap of the Amazon bag broke. I never carry the bag by the shoulder straps which means A) it's not much of a problem, but B) it broke after practically no use.

For the serious traveller

As I've said, if you're doing a lot of traveling, I wouldn't recommend these bags. If you're a back-pack journalist there's another bag that I saw this weekend which looks much better.

The Think Tank Photo Airport Accelerator Backpack is expensive ($294.75) but for the serious traveler, this bag is recommended (not really by me, but by a journalist I know who has one.) It will hold a camera, a large lens, lots of bits and piece or a couple of other lenses (at least), and also has a space for a laptop computer.

The picture below is how one backpack journalist has his bag set up: 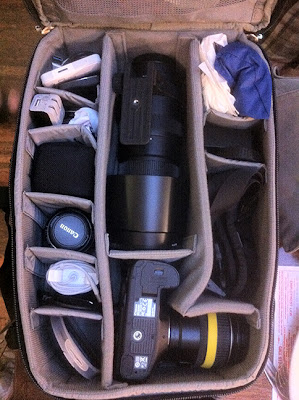 Another advantage; it doesn't really look like a camera bag. It looks like an expensive bag, but not a camera bag, and it can be hand carried on the plane.

However, you could buy 7 of the other bags for the same price...
Posted by Michael Murie at 6:30 AM

FYI, I'm partial to Manfrotto's backpacks, from the Agile VII to the Lino.

I have always said I was going to go back to Amazon and write a review about that bag. I bought it over 2 years ago because it was my first, had good reviews, and cheap. I had already started saving for a more "pro" bag as I just knew my daily use would surely have the Amazon bag falling apart in no time. I have had it loaded up real heavy, yanked it every which a way, caught on fences while walking, etc. It still has held up well...which I cant say the same for my light stand and tripod bags. Glad to see I'm not the only one who found this bag worth it's cost and more. Keep up the good work...read your blog every weekday!