The importance of story

As I already mentioned, my daughter started college last week. The school organized a number of activities for parents, including a tour of three of the arts buildings. The film/video building particularly caught my attention. On the video side, they are using Final Cut Pro 7 and FCPX, but are thinking about going to Adobe Premiere CS6. It’s a liberal arts college, and their focus (in all the schools) is more on the theory and principles of how to do things, rather than getting hung up on the software and equipment. I think that’s a good thing.

One of the tour speakers mentioned that a few students had already shot projects with the RED camera, but that you could do almost as good with DSLRs. As he said, you can now create something that looks as good as a Hollywood movie, and that will get the viewers attention for the first five minutes, but what happens after the first five minutes? Then it’s all about the story.

I seem to hear that a lot from other people… 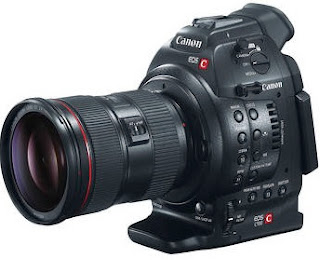 I’m really intrigued by the Canon C100. When looking at the current large-sensor video cameras (not including DSLRs) under $10,000, there’s now four choices that I'm attracted to:

Sony NEX-EA50: I like the zoom lens, shoulder mount and "pro" features like XLR input. Price looks good, but no ND filters is disappointing and image quality probably not as good as the other four.

Sony NEX-FS100: No ND filter and placement of the LCD is a problem. Price is okay.

Sony NEX-FS700: ND and Super-slow motion are great. LCD placement a problem. Price is a serious stretch. Several people tell me the image isn't quite as good as the C300..

Canon C100: ND and built-in support for Canon EF lenses. Not sure about LCD placement. Will the image be close to the C300? No Slow-no. Price is a serious stretch.

When it comes down to it, I’d like to get either the NEX-FS700 or C100, and picking between them could be difficult. Will the image on the C100 be slightly better – more filmic – than the NEX-FS700? Super-slow motion is a big plus for the NEX-FS700, but I have a bunch of Canon EF lenses, which makes me lean towards the C100, even though you can get adapters for the NEX-FS700.

Of course, at the moment, I can't afford any of them...

Through November, the University of Massachusetts is hosting a series of documentary film screenings, with a Q&A with the filmmakers afterwards:


The series hosts filmmakers for Q&As moderated by curator and lecturer Chico Colvard. The Film Series also partners with UMass Boston faculty, film industry insiders, and local organizations to participate in post-screening panel discussions about the issues central to the featured films. Ultimately, the UMass Boston Film Series aims to create a synergy of place between UMass Boston and the moving image.

University of Massachusetts Film Series
Posted by Michael Murie at 6:30 AM

unique. thanks for the information.

You've echoed my feelings exactly towards the pileup of post-DSLR options. If I think business, the C100's hopefully C300-like image stands out as being worth my investment.

That's not to say that the FS700s slow-mo isn't really, really appealing.

If the GH3 finally gets up 1080p60 in addition to sporting improved dynamic range (the ugliest part of the GH2) - pairing a C100 with a GH3 could be a great little kit. You'd gain stills and time lapse functionality over the FS700 too.

Thanks again for the great blog Mike