The newly announced passive M4/3 mount Blackmagic Design cinema camera (BMCC) presents a more attractive proposition to many shooters than it’s sister the EOS mount BMCC. Why? because it opens up a whole range of lens options that are otherwise impossible or difficult to mount on the EOS version of the BMCC. 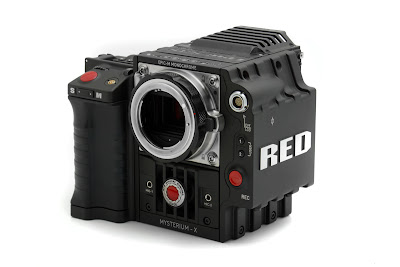 
If you are looking to shoulder mount this camera, we recommend using an in-line rig like the Stinger or Recoil and using an EVF. The LCD screen on the back of the camera is in an awkward position; it isn’t directly in the back and it isn’t pushed out to the side enough to offset the rig. It is very uncomfortable to try to shoulder mount this rig and use the Z-Finder/LCD Screen.


To complete the market leading XDCAM HD 422 handheld camcorder line up with the PMW-100 and PMW-200, the PMW-150 is a compact camcorder with three 1/3-inch-type Full-HD sensors. With its high-quality Full HD MPEG HD422 at 50 Mbps recording capability in MXF format


The Quadro K5000’s next-generation streaming multiprocessor design offers important architectural changes that can transform your workflow. These include tremendous increases in per-clock throughput of key graphics operations for new levels of performance and power efficiency. Plus the Quadro 5000 features a large, 4 GB frame buffer that lets you work with larger scenes and improve interaction during the creation process

WHEN SHOULD YOU GIVE UP? | Scott Macaulay | Filmmaker Magazine
On a film, not your career:


But some films shouldn’t come out. They don’t work, and they don’t represent the filmmakers’ potential as much as they need to. Where would Quentin Tarantino be today if he had spent years flogging on the festival circuit and then DIY-releasing his own largely unseen first feature, which he admits in interviews was chopped up into guitar picks? (Yes, we’re talking the days of celluloid here.)


As the theorist David Bordwell writes, “Theaters’ conversion from 35-millemeter film to digital presentation was designed by and for an industry that deals in mass output, saturation releases and quick turnover.” He adds, “Given this shock-and-awe business plan, movies on film stock look wasteful.”


Last month Adobe also changed some of the licensing details on Adobe Story. For those not familiar with Story, it is a script writing tool that has several interesting features; available as a web-based tool and an AIR app, you can edit and share files stored on Adobe’s servers, or work on files locally (the AIR app is only available with the paid version of Story.) In addition to online collaboration features, Story is tightly integrated with Premiere, so you can import the script and have Premiere use the script to help with speech analysis of the clips


The class for adults and teens over 15 years old is a fun yet intensive hands-on course that covers everything beginners need to create great 2D character animation. It is great for students who want to improve their skills or build their portfolio, adults who want to learn something new, and those who simply love the art of animation. It will run for three Saturday sessions, September 15, 22, and 29 from 11:30am to 5:00pm. The course fee is $250.