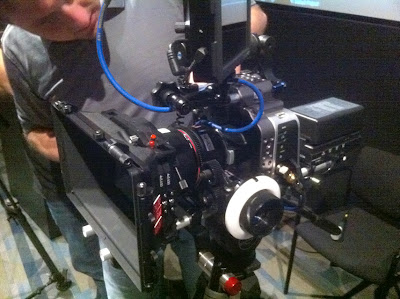 Marco Solorio of One River Media spoke at last night's Boston Creative Pro User Group about the Blackmagic Design Cinema Camera. Also present were a couple of reps from Blackmagic. I'm not going to go into great length about what he said, partly because it's late, and partly because it's all there in the two videos he has already posted online:


The first compares the Canon 5D Mark III and the Blackmagic Cinema Camera at some length, while the second is a "short" that was shot using the BDCC. Marco has written a couple of extensive blog posts that covers the production of this short, and most of what he talked about at the meeting is covered there.

The Bad News
The bad news from the meeting is that production of the BDCC has been seriously constrained by a parts supplier. It appears that they aren't shipping any cameras at the moment, and they aren't really sure when they will be shipping cameras. A blog post is being prepared that will be posted today by Blackmagic explaining the situation, though it won't have any dates for delivery.

The Good News
The latitude on this camera is incredible. There's things to not like about the camera; the workflow for the RAW files is problematic, there's no audio monitoring onscreen, or aperture display at the moment, and of course, it is a smallish sensor camera. If you love wide angle shots or super-shallow depth of field, then the camera may be a challenge.

But most of the other working issues; the odd form factor, lack of ND etc., are all issues that you can face with a DSLR. Nothing seems insurmountable. Rolling shutter appears to be about the same as the 5D Mark III, and moiré was very noticeable in the test chart, though Marco seemed to think he could remove it easily enough.

But look at Marco's video - if you haven't already - and it's the dynamic range that should impress you.

Afterwards, a few of us discussed the camera over beers. I think the consensus was that it looked very good, and at $3,000 it was almost a matter of; why not get one?. Provided you could find one. Certainly, when compared to the 5D Mark III, the BDCC seems like the better video camera. So perhaps the question is really; why would you buy the 5D Mark III?

UPDATE:
You can read the post from Grant Petty of Blackmagic here: Update on Camera Shipments


While investigating the problem our engineers found the blemishes were in the glass that covers the sensor, and not the sensor itself. This is good because the glass might just be dirty so we saw this as a quick fix, but wondered how a supplier could deliver us sensors that had blemishes, as they are supposed to pre test them.


I deeply apologize for the delay in shipping and it has been very frustrating for us as well to be sitting on a completed and tested product for a month that we cannot sell. Especially when people need them urgently.
As you can also see from the breakdown of the problem above, there has been multiple stages of testing to discover the cause of the problem so it has been hard to lock down dates or what was going on until now, so its been hard to update everyone on the exact details.
I hope this update helps people understand the delay. We should know more details about shipping times once the new glass arrives at our supplier.