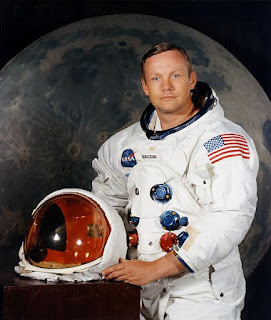 It was 43 years ago that man landed on the Moon.

And 40 years ago that the last man stepped foot on the Moon.

The best book I have read about what it's like to be an astronaut is Carrying the Fire: An Astronaut's Journeys by Michael Collins, who was the Command Module Pilot on Apollo 11. The one that didn't set foot on the Moon.

Collins says in his book that Armstrong actually said:


That's one small step for A man;
A giant leap for mankind

But a drop-out in the radio transmission cut out the 'a'. The quote makes more sense with the 'a,' but try telling that to everyone that constantly quotes it without.