CHART OF THE DAY: The Explosive Growth Of The iPad | Jay Yarow
| Business Insider
Pretty amazing chart showing the growth of the iPad vs the iPhone and iPod. Of course, when you think about it, it's probably unsurprising that the iPad sales are faster and higher than the iPhone...the iPhone establishing the business, but being a specialized and more expensive choice. 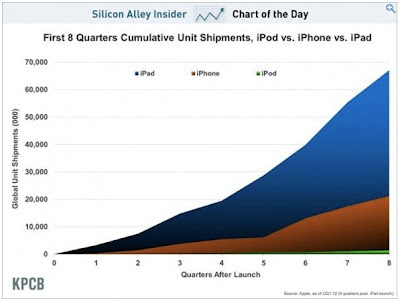 Three choices | Oliver Peters | digitalfilm
Olivier looks at Adobe, Avid and Final Cut Pro and offers his interpretation of which environment will appeal to which users:


In closing, remember this is just a simple way to present the options. There’s nothing that says you can’t mix and match After Effects and/or Pro Tools with EDIUS, Media Composer, Vegas, Media 100 or any other variation. My world is headed primarily to an Apple/Adobe witches brew of applications.

RAW 1080p is Coming with the Blackmagic Cinema Camera, but Can You Afford the Hard Drives? | Joe Marine | No Film School
The problem with RAW, no matter what camera, is what to do with all that data?


Thankfully, the camera shoots more than RAW video, as it can also shoot slightly compressed DNxHD and ProRes — but what if you do want to shoot RAW? Just like with DSLRs, most of the RAW video available in higher-end cameras is slightly compressed, as bitrates can exceed bandwidth. To keep costs down, the RAW in the BMCC is completely uncompressed RAW video, which means, you’re getting bit for bit everything that is coming out of the A/D convertor (which takes the information from the sensor and translates it into digital values).

A Saturday Rumpus List of Writers In Unsuitable Employment | MICHELLE DEAN
| The Rumpus
An unusual list of career choices:


1. Kurt Vonnegut managed a car dealership for Saab. At this link you can find the letterhead to prove it. He tried to learn car mechanics, but the Saab people felt he had no talent for it and kicked him out of their classes.


The Litepanels 1×1 LS offers many of the features found in the popular 1×1 Mono panel fixtures, but at an entry-level price. The 1×1 LS maintains the same high quality, full spectrum soft light as Litepanels’ other 1×1 LED panel fixtures while removing the more studio-specific components to focus on the needs of location productions.

Posted by Michael Murie at 1:36 PM