I bought one of the original Lensbaby's - now called the "Muse" series [$149.95] - several years ago. I think that was before we were using DSLR's to shoot video and still thought of them as just "still cameras" And as a still effects lens, the Lensbaby can be a lot of fun; it provides a very ethereal, unworldly feel to an image. 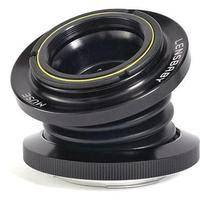 Lensbaby Muse
The problem with the Muse model is that it uses a flexible tube that you push and pull against to create the effect. That's mostly okay for stills, where you can push it into place, hold it still for a second while you take a picture, and then let go....and try again if it didn't work out. But for video, that doesn't work quite so well. Actually, that flexible tube can be pretty stiff to hold in place even while taking stills.

Lensbaby then followed the original series with the "Control Freak" series [$309.99], which use three metal rods to keep the lens in position. An improvement - I'm sure, I haven't actually used that model - but those rods look like they make operation a bit slow and tedious. 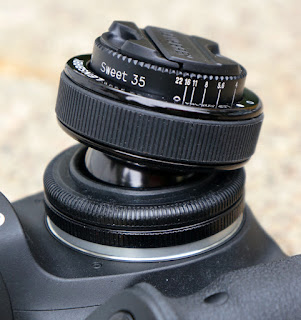 Lensbaby Composer "Sweet 35"
Then they released the Composer series, which uses a ball and socket mechanism to move the lens. This may not give you quite the flexibility in the movement of the front mechanism relative to the plain of the sensor, but it's much faster and easier to use. The Composer is available in two types; as the "Double Glass Optic" [$299.95] model or the "Sweet 35" [$399.95] model. Though it's $100 more, the "Sweet 35" model is the one to get; if only because it has a built-in 12-blade diaphragm (with the other model, you have to insert a different aperture disc to change aperture.)

The Composer series is very nicely built compared to my original model, which was very plasticky. I like the moveable turret which lets you adjust position of the lens and keep it where you want it to be. The aperture dial is easy and clear to operate and the focusing ring is smooth; though focusing with this kind of lens can often be a bit trial and error to decide what should actually be in focus (or you can have nothing in focus and have a very ethereal effect!) Moving the lens while shooting is possible, and the motion can be pretty smooth, but I found at the extreme end of movement that it sometimes hung up a little causing the lens to shudder a bit.

Conclusion
The Lensbaby is a special lens that may not be everybody's cup of tea. If you're shooting video, avoid the Muse series entirely. I think the Composer with the Sweet 35 is the best choice with it's stability and built-in aperture diaphragm.

Note: The unit used in this review was loaned by B & H Photo Video.
Posted by Michael Murie at 7:00 AM