Redrock Micro EVF
EVF's are all the rage at the moment, with Zacuto finally shipping samples of theirs. Redrock also showed an EVF back about the time Zacuto first showed their prototype, but Redrock's seems to have run into problems, and wasn't really even talked about at NAB.

Now Redrock Micro, on their Facebook page, has announced:


Last year Redrock was the first to announce an electronic viewfinder designed for HDSLR cameras. Since then a number of other EVFs have been announced, but at a much higher price points - $750 and even higher. We believe that's too expensive.
What's needed is an EVF that maintains our vision of a compact, lightweight, full-featured accessory, but at about half the price of current offerings: our target is $375 or less. With that as our goal, we continue to refine our design and feature set of the microEVF.
We do not currently have a release timeframe for the microEVF. If you would like to keep up with progress, please subscribe to our newsletter (on our home page), follow us on twitter @redrockmicro, or like our facebook page 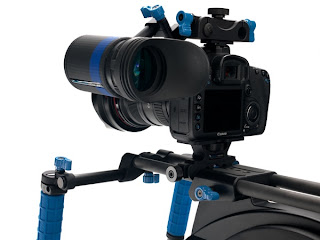 NAB Show Virtual Show - May 12th
Not sure what this is - it could be terrible - but the NABShow Virtual View takes place today from 10am to 6pm. Last time I took part in a "virtual" online trade show, it was pretty weird; you had to "wonder around" on the site to find pictures and videos, though there was a couple of online chats with company reps that were interesting, so you never know:

Join the NAB Show as it launches the first official online extension of the April Convention in Virtual View. See product demonstrations you may have missed or continue the conversation from the April show — from the convenience of your home or office.

NVIDIA Quadro 4000 GPU review
It's ironic; three days ago I write about how I'm not into GPU's and then Scott Simmons posts a review of the Quadro 4000 for the Mac.

It's an interesting review, particularly as he writes about some problems with Mac OS X not supporting the latest version of OpenGL:


OSX currently supports 3.1 but the spec is at 4.1 and you can see on the NVIDIA product page that they require booting into Windows via Bootcamp to use 4.1. Then you’re not running a Mac. There is also the OpenCL spec which according to the Apple website is described as “a new technology in Mac OS X Snow Leopard called OpenCL [that] takes the power of graphics processors and makes it available for general-purpose computing.” Great. But if you do a little searching around the Internet it appears that Apple’s OpenCL might not be entirely recognized by the Quadro 4000.

But if you get through all that okay, he checks it out with Premiere Pro CS5.5, DaVinci Resolve for Mac and a few other applications, and notes some significant performance improvements.

Using Soreson Squeeze he took a 4:36 music video and encoded it using the iPhone preset, with and without the GPU:


By far the biggest performance advantages come from applications that are specifically written to take advantage of NVIDIA’s CUDA technology. It seems that the hope is that the next version of the Mac OS (10.7 Lion) will allow for better GPU acceleration no matter which graphics card you use.

Screenwriting
Ernst Vikne says that he likes intelligent writing, but not clever writing, and defines clever writing as when the writer tries to draw attention to the writing:


Where a scene tends to fail, is when a writer replaces one of those elements with cleverness... so, instead of simplicity we get cleverness, or instead of observation we get quirkiness (which is just cleverness with an ironic shrug and a grin), and instead of a theme we get clever, witty dialogue.

YouTube alternatives
Zachary Sniderman looks at alternatives to YouTube: Blip.tv, Vimeo, Flickr, Veoh, Viddler, DailyMotion and yfrog. The article provides a nice summary of what each service offers, key features and why you might want to use them.
Mashable: 7 YouTube Alternatives & Why They Make Sense

iPad in a Slate
Pomfort has created a prototype of a movie slate that holds an iPad. An interesting idea, though it's not officially a product yet.
HandHeldHollywood: Pomfort tells the iPad Slate to Get Real!

Note that, Steve Weiss of Zacuto says of the tests:


We didn't pick the cameras and had nothing to do with the testing.  That was Bob Primes test.  We just made a documentary about the test, screened the test theatrically in many cities and at NAB and will present the test, how the test was done and the viewers comments on the test in the Great Camera Shootout 2010.