Most camcorders include a tripod mount, but one thing that can distinguish professional from consumer equipment is the thought and expense that goes into the construction of that piece of the camera. A good tripod mount is more than just a hole in the bottom of the camera; ideally the bottom of the camera where the camera comes into contact with the tripod should be flat and solid so that the camera can be tightly mated to the tripod shoe. Unfortunately, many consumer cameras simply mold the whole area out of plastic, and the bottom surface isn't always flat. Light plastic isn't going to stand up to much wear and tear; but then again, how many people put a handicam on a tripod anyway?

Over at the Sony NEX-VG10 User group, some users are complaining about the NEX-VG10's tripod mount, and how poorly it mates to a tripod (making it difficult to adjust zoom or focus without the camera moving.)

Over on the DPReview forum, a reader damaged the base of his camera when the Glidcam unit it was on fell over. The reader tries to minimize what happened by saying it was "bumped over" and "tipped over 1.5 ft"; but clearly it fell over, and if that's the only damage to the camera he should probably consider himself lucky! Actually, any damage to a camera that fell a foot and a half probably can't be blamed on a design deficiency. 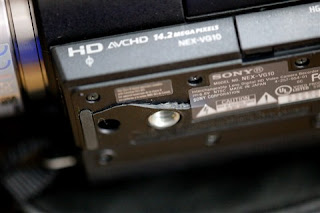 source: DPReview.com thread [Broke the VG10]
Still, for those looking for a way to improve the connection between camera and tripod, Olof Eckberg at WestsideAV Studios, North Conway NH, makes tripod plates for several cameras, and he says that he could make a plate for the NEX-VG10, and if someone is willing to stop by with their NEX-VG10, he'll measure it and make a plate (and give that person a copy too.)

it flexes and then allows the metal tripod part under the plastic housing to break. If you're not careful the metal part will break right through the plastic plate.


Yeah Bad Design. Still really Like the camera though.

Happened to mine too. over tightened the mount on my first use and the mount bulged on the bottom. I was able to remove the bulge but on my second use it was so weak inside that the threaded mount snapped free and now it just spins with my mounting plate. I had to open up the body to temporarily fix this but I,m not so sure I'll ever use this one on a tripod ever again!

Here is my fix

This happened to my camera too.

Looking t the bottom on the NEX-VG20, the case around the tripod mount does seem pretty flimsy. I think the problem is that if you put a heavy lens on the front of the camera, it's likely to stress that part. Also, is the camera gets knock while on the tripod, that will put additional stress on that region.

This will fix any of of the VG series cameras.
http://www.youtube.com/watch?v=4-eGsx54jAw

Same problem. The video is "not available" and I can't seem to find it from a youtube search. Can anyone help with the fix options?
Thanks
Mike in Burlington, ON

yup. it happened to me too on my nex vg10. I was extremely careful. Just a very flimsy camera mount. Very not happy.