James May Wants Your Clips
James May of the British TV show Top Gear has issued a call for unusual videos:


Little cameras allow us to view the world not as we see it, but as it would appear to other bits of the world, if they had eyes. I'm thinking of a film about the engine in my old 911, seen from the underside of the bootlid, lit by an inspection lamp rewired to stay on permanently. This is new. This is exciting.

Make a very short film about your car or bike: an angle that's not been seen before, a way of thinking about driving that hasn't occurred to us yet.

There's no prize for the best or anything like that. This is art, and it is its own reward.

The following is an animation contest rather than a video contest, but with William Shatner as the subject, how could I resist posting?

William Shatner Animation Contest
Toon Boom Animation and MyOuterSpace.com are joining forces to make the greatest talent in the creative galaxy COME FORWARD and shine! The contest will challenge your creativity and originality and show the universe your support for MyOuterSpace.com. With the animated William Shatner starring in your lead role and three audio voiceovers to choose from, this is your opportunity to showcase your skills as a top-notch animator! 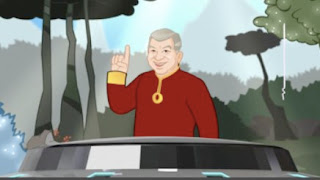 Prizes include:
ToonBoom: an Out of This World Contest

Shatner fans might want to check out yesterday's interview on OnPointRadio: William Shatner
Posted by Michael Murie at 8:00 AM