Oliver Wilkins writes about the process of making a short film on the Egyptian village of New Gourna for Community Consortium and World Monuments Fund. It's interesting both for the notes about hardware and process, but also because the project turned out to be more complicated than they had originally imagined:


The initial plan was to put together a film that demonstrated how the residents themselves are intrinsic linked to Hassan Fathy’s vision of New Gourna. We had two days on location and during our morning recce on day one it became quickly apparent that our vision of happy people living in idyllic adobe architecture didn’t quite reflect reality. During the interviews some colorful opinions of Hassan Fathy emerged along with complaints about the condition of the houses, generally citing issues of rising groundwater, a lack of sanitation and the limitations of expanding the single story adobe architecture in an age of population growth and soaring land prices. 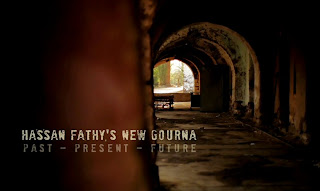 Even better, you can watch the finished movie too.