Steve Jobs rolled out the expected new version of the Apple TV that's 1/4 the size, and geared towards streaming and rentals of TV shows/movies (it has no internal storage.) You can still stream from your computer, so I assume you'll still be able to buy TV shows and movies using your computer if you want to.

In the past, Steve somewhat dismissively said that Apple TV was a hobby, and they even riffed on that at the beginning when he said "One More Thing" and the screen changed to "One More Hobby."

I was a bit surprised that the interface seemed almost identical to the current Apple TV; it had been rumored that it would use iOS, but when introducing it, Steve listed things they'd learned from the original Apple TV, and one of them was that people "don't want a computer." 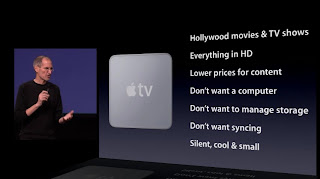 The Apple TV will retail for $99 and be available in four weeks. It has HDMI output only (which is a problem for my old component only TV.)


Steve also demoed AirTunes (now called AirPlay) and how you can pass things from one device to another; specifically he was watching a movie on an iPad, and then "sent" it to the Apple TV and continued to watch the movie there. I'm assuming the movie was being streamed from the network to the iPad, and the video/time information was passed between the devices. This kind of network-synchronization of devices/content may prove to be a more important "new technology" than the rolling out of a smaller Apple TV.

A note about the webcast.
This event was live streamed - the first time Apple has done that in a while - and for the most part it went very well. High quality video looked good, though a couple of times it froze or started to stutter, though it did recover. That could have been my connection too. But at the end, just as he was wrapping up, for some strange reason it started replaying from the beginning!