An abbreviated post from my iPhone about the Canon Expo. I'll just list the highlights and try and do a more in-depth report next week.

1. Coming down I read a couple of Tweets from another blogger that described it as "corporate" and rather lame. Maybe I was expecting the worst, or had my expectations lowered, but I'm pretty amazed. They have ice skaters!!!

3. New York is humid and crowded.

4. The 4k camera is amazing as a demo, even if they didn't really have many details.

6. Daniel Berube from the Boston Final Cut User Group may get drummed out of the group; he was demoing Adobe Premiere!

7. They have an amazing print-on-demand machine...for those interested in that kind of thing.

8. I was surprised by the best speaker of the day; Corbin Bernsen. He's pationate about indie film making. I may not agree with all his ideas, but he has a lot if them! Well worth hearing. 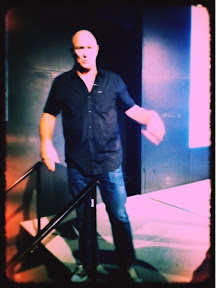