Thoughts on the NEX-VG10

It’s only been a few hours, but already the Internets are buzzing about the Sony NEX-VG10, which was announced this morning: What does it mean to the HD SLR market? How will it perform? What about 24p?!

When it comes down to it, the NEX-VG10 has two outstanding features; interchangeable lenses and a larger chip, the latter making for shallower depth-of-field when working at large apertures.

But have they messed up a couple of important things? 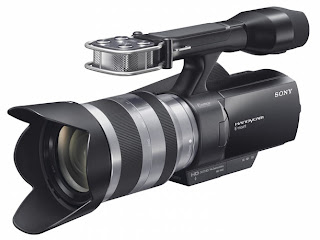 Sony's second mistake may be in pricing and bundling.

Including a good lens makes sense, but means the bundle costs more than twice what the Canon T2i body costs. And people look at the body cost first, even though they forget they’ll have to spend at least a few hundred dollars more on one or two good lenses. This bundling could be a big strike against the NEX-VG10 since and the T2i seems to be one of this cameras biggest competitors. Sure, the T2i shouldn’t be considered competition for the NEX-VG10. Except that it is.

There’s a lot of things we don’t know about the NEX-VG10, and we'll have to wait until people get their hands on the camera and review it to get many answers; how does it perform in low light? how do the manual controls work? how well does the lens work? How bad is rolling shutter? How good is the optical stabilization? What’s the audio mic like?

But despite this, let’s take a look at how this camera seems to compare with other cameras both in Sony’s lineup and the Canon T2i.

What the NEX-VG10 does better:

What the HDR-CX350V does better:
Other things we don’t know: How the manual controls compare. How good the VG10's mic is.

What the NEX-VG10 does better:
What the HDR-AX2000 does better:
*The NEX-VG10 has manual controls, though it looks like they mostly get managed through menus and on screen controls rather than physical buttons.

The new VG10 audio capsule is a bit of an unknown quantity, but it’s still on the camera, so a mixed blessing for most serious shooters. I'd rather have XLR inputs.


Compared to Canon T2i
Comparing the VG10 to a SLR seems ridiculous, but large numbers of people are buying these cameras to shoot video.


Conclusion
Compared to the two camcorders, the NEX-VG10 has some notable differences. Picking between them really depends on what you are doing (and how much you have to spend!)

On the face of it, the NEX-VG10 is a much better camcorder than the Canon T2i. Autofocus alone would have me grab for a VG10 in most situations. And if you’re thinking of buying a Canon 7D, the NEX-VG10 (once you add a lens) will cost you less too! Sure, the lack of 24p is a concern, and the higher Mbps of the video file from the T2i may mean it produces a better image (unless the T2i is just lousy at compressing video data.) But will the NEX-VG10 attract the enthusiasm of the people that have created the excitement in the HD SLR world – the Vincent Laforet’s and the Phillip Bloom’s – or will they look at the lack of 24p and go “interesting camera, but I’m going to stick with Canon?"

If Sony had come out with this camera a couple of years ago, it would have been a sensation. But that was then, and I can’t help thinking that Sony may have made some serious miss-steps with this camera, as intriguing as it appears. We’ll only really know when it’s out and in the hands of users.
Posted by Michael Murie at 12:30 PM