Marshall is known for producing high-quality field monitors. With rugged construction and features like false color and peaking filters, they are pretty much standard equipment for professionals. But monitors like the V-LCD70XP and the V-LCD651ST cost between and $1,150 and $1,600.

Now Marshall are entering the budget market with the 7" M-LCD7-HDMI monitor. This is sold as a kit including the monitor, a mini-HDMI to HDMI cable, standard HDMI cable, A/V cable, PC cable, battery, AC power supply, stand, hot shoe camera mount adapter, and remote. There's currently three models available that work with either Canon LP-E6 batteries (used in the Canon 7D and 5D Mark II) the Canon BP511 and the Nikon EN-EL3E, and each includes an appropriate after-market battery.

What doesn't it have? This model looks suspiciously like a monitor being sold by some other vendors. It's construction and the quality of the screen may not be on the same professional level as some of other Marshall's monitors. It also does not appear to have features like peaking. 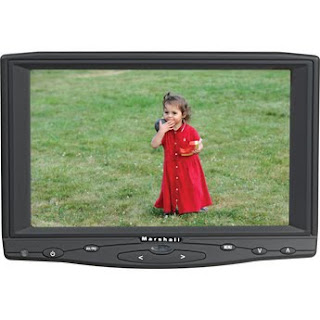 One other thing to note: it's unclear whether this model is functionally any different from the model available from other sources, so you may be able to pick up the monitor for less, though you should factor in the cost of the accessories when comparing prices. There is also a version without the battery and accessories.

FINALLY: At NAB Marshall announced the V-LCD50-HDMI, a 5" monitor that has the construction and features of Marshall's high-end monitors in a smaller size, and is supposed to sell for under $600. It's supposed to be available in the fall.

i have seen this for sale at various places but i cannot find it on the marshall website. is this a brand new product from marshall or something?

still kind of out of my budget range. please can you tell me if this will be suitable Michael:

this is a bit cheaper for me and has a battery too.

i am a professional photographer and need a larger field monitor to take out on shoots with me.

I suspect that the Lilliput monitor is very similar - it may even have the same screen. It has the same 800 x 480 resolution, and 500:1 contrast ratio.

It doesn't look like it has a speaker though, and input are listed as HDMI and VGA, whereas the Marshall also has composite and audio. Those probably wouldn't be deal breakers.

By the way, what do you want to do with it? Review material after it's shot, or use it to monitor video and focus while shooting? If the latter, I'd think about getting an optical viewfinder (if you don't have one) before getting an external monitor.