Back when they announced the NEX-5 APS camera, Sony talked about an interchangeable lens HD camera using the same chip, but we all thought it would be close to the end of the year before they even announced that. Clearly Sony had other plans, as they have just announced the NEX-VG10, though it won't ship until September. 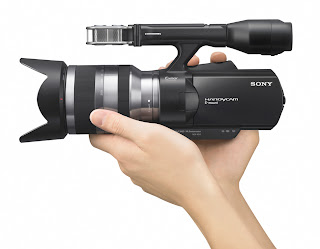 The NEX-VG10 will be available in September for about $2,000 and presales on www.sonystyle.com will begin July 14. They will also be available at Sony Style retail stores and at authorized dealers nationwide.

[UPDATE: Sonystyle website has a page for the camcorder with more pictures, advertising copy and a short promo video. You can also pre-order for $1,999. Click the "Shop Now" button to go to a page with specifications and more feature information. Sonystyle.com: NEX-VG10]