The case for and against the HXR-FMU128

If you have recently bought a Sony HXR-NX5U video camera – or are thinking of buying one in the next couple of months – then you have an important decision to make before March 31st: should you buy the 128GB Flash memory unit? 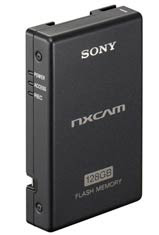 Even more importantly, the HXR-FMU128 makes it possible to perform dual recording with the HXR-NX5U; recording to both the memory card and the FMU128 at the same time. It’s not possible to do this with the HDR-.AX2000 because that camera doesn’t support the FMU128.

It should be noted that at least two people have reported buffer problems when dual recording, and no one really knows why that is happening (the reports so far seem to be limited to people who are dual recording, though that may not be the cause of the problem.)

With the cameras I have that use flash cards, I find that I have to copy off the content before each shoot, whether or not I am ready to edit/transcribe it. With the 120GB of space, it’s easy to leave the stuff shot yesterday on the camera, and go off for the next days shoot. And two months later the drive is full and I have to actually do something about it.

For Final Cut Pro users, this poses an additional problem, because to be able to use the Log & Transfer function you have to archive the whole file structure. This means that if you aren’t religious about archiving as you shoot, you have to create an archive that contains multiple days and subjects. That makes finding things more difficult.

Of course, you can just exercise more discipline and back up stuff every day and reformat the drive and start again. It really depends on the type of person you are. For me, the forced limitation of smaller memory cards seems to work better.
Posted by Michael Murie at 11:25 AM

I do have the buffer error also in the HXR-FMU128, and I'm not dual recording, but I'm shutting straith like 8 or 9 hours.

At the beggining everything worked fine but now with 5 or 6 hours I get the buffer error.