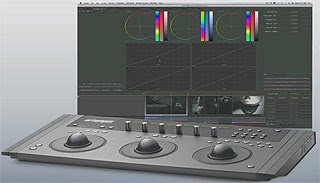 Though it was announced back in September, it appears that the Euphoniz MC Color Grading Surface has only just started shipping. The MC Color is a worksurface for Apple Color that has three trackballs and lots of programmable buttons. It works with the Mac via Ethernet. Features include:
An over-view video is available as well as a guided tour and brochure.

It's a real cool toy, but at $1,500 it's perhaps only for the serious Apple Color user.

Posted by Michael Murie at 3:00 PM