I have to admit, I was a bit jealous of the higher resolution camera and video capabilities of the 3GS iPhone; but not enough to spend the money to trade in my existing 3G iPhone.

But Qik's Wideo Camera app works on older iPhones, and for $1, it isn't too bad. Okay, it's rather stuttery and has what looks like a terrible rolling shutter problem when panning, but it's video....on an older iPhone. You can also add filters (Black & White, or colorize, though I'm not sure I'll do that.)

Two video sizes are available: 400 x 304 and 200 x 152. you can record vertically or horizontally, and the video gets flagged and plays back in the correct orientation on you computer. 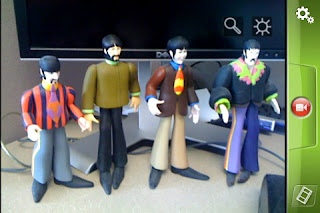 Once you take a video, you can review it in the Gallery, and you can email it to yourself - or others - which is probably the quickest and easiest way to transfer the files.

I'm definitely not going to use this for anything "serious" but as an added "note taking" capability, it's definitely worth the $1.

Some "typical" videos below include a recording of a person speaking indoors (in poor light) and video taken outside in our miserable New England weather. QuickTime Player reports the FPS at being 13.23, 13.55 and 13.64 respectively for the three clips.