Revising Your Script: The Evolution of Even The Dogs Know | Filmmaker Magazine


Intrigued by how the script had evolved, and because Capodiferro had worked on the script through several screenwriting classes and workshops, I asked him if he would explain the evolutionary process of the script in more detail


At the suggestion of reader Martin Warrilow, I went through AC magazine’s online archives and pulled the answers to this question from 88 different cinematographers. Some are well-known while others are still under the radar. Yet all have crucial insight, wisdom, and knowledge to share that could help you in your filmmaking career.

DIY Monday: Telling the Truth Without Paying for it | MovieMaker


Most documentaries show some slant in the way they present a story to further their theses. Likewise, fictionalization of true events in a narrative film can result in the altering of facts. Both mediums can therefore subject their creators to claims of defamation, right of publicity, and right of privacy claims—exactly what a moviemaker doesn’t need after the arduous process of finally getting to the finish line.


Final Cut Pro X 10.1 is on its way to the App store. You probably will need Mavericks installed. Now is the time to prepare for a smooth transition to 10.1, There are probably going to be some changes in the way FCPX 10.1 handles Events and Projects. If FCPX follows iMovie 2013, it will have a single Final Cut Pro Library for each Project and associated media instead of the two folder system it now uses.


How to Get Your Work Seen by Clients in the Video and Photography Industry | Philip Bloom
Guest post by Andy Baker, SVP/Group Creative Director, National Geographic Channels


Have you ever wondered “What the hell is my client thinking!?”  If so, well, you’re probably not alone.  Recently, I was fortunate to speak at the Masters in Motion filmmakers workshop in Austin, TX, where I went “Inside the Mind of a Client” – shedding a little light on the Client’s perspective, revealing a bit about what they are thinking, and taking a macro look at the ever-evolving role of the Client in the creative process.


ATTITUDE IS EVERYTHING
I can’t stress this tip enough. I’ve worked with some fantastically talented people over the past few years who I would never choose to work with again, despite their talent or their knowledge, because they had a crappy attitude on set.


Sam Richards at Sony Pictures Imageworks has been working away hard on coding and producing something so simple it is hard to believe we need it as an industry, and yet as most artists know, it is a vital part of production that is often lost: accurate on-set camera notes.


Not too long ago, we released an update to deal with an issue some of you were having with Magic Bullet Looks and Colorista II pulling black frames with Premiere Pro 7.1. Internally, we classified the fix as a bit of a bandaid solution. It worked in most situations, but still needed some work to get to full resolution. With some help from Adobe, we were able to pinpoint exactly what needed to happen and we now have a full fix available!


Diffusion is a highly subjective matter. It is in your best interests to test multiple diffusion filters thoroughly before use. Not only must you look at the image on set, but also study its qualities on a large broadcast monitor in post production to see how it will match with shots that are cut before and after it.


Kipon and Ibe announced the new Baveyes 0.7x adpater for Sony E-mount cameras. It’s basically the next Speed Booster alike adapter that sells for $300. STarting from January 10 there will be Nikon F, Canon EF and Leica R mount lens adapters. 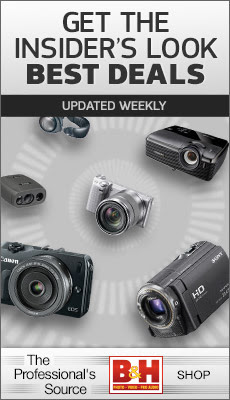