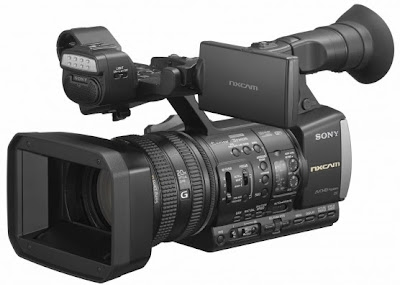 Sony has announced the HXR-NX3 ($3,495, expected in January). This isn't a large sensor, inter-changeable camera, and it doesn't have 4K, so it won't get a lot of coverage, but it's a good general purpose professional level camcorder.


Here's a couple of videos:


Shot in Istanbul by DP Den Lennie, this video demonstrates the beautiful results that can be achieved on our new HXR-NX3 handheld HD camcorder. Boasting leading lens, sensor and LSI technology, in addition to built-in WiFi technology which allows it to be connected with devices such as smartphones and tablets, the HXR-NX3 is ideal for the professional videographer.


We go behind the scenes with DP Den Lennie in Istanbul as he explores our new HXR-NX3 handheld HD camcorder, to beautiful effect. Boasting leading lens, sensor and LSI technology, in addition to built-in WiFi technology which allows it to be connected with devices such as smartphones and tablets, the HXR-NX3 is ideal for the professional videographer.


The HXR-NX3 is capable of light MP4 file simultaneous recording. The MP4 format (720p, 3Mbps) produces a network-friendly file that users can transfer wirelessly from the camcorder to a smartphone or tablet computer using the PlayMemories™ Mobile smartphone application (*3). Once transferred, the MP4 file can be uploaded to a cloud server, social media sites, video sharing sites and other platforms (*4). Users can download the PlayMemories Mobile app from the Google Play Store or App Store.


The camera records to AVCHD 2.0 at up to 1080/50p (in Europe) and uncompressed 8 bit 4:2:2 is available through the HDMI output for connection to an external recorder. (It's interesting that manufacturers are now including this information - a recognition, surely, that some users like the option to record the uncompressed output externally).


"What I was expecting ( and been waiting for ) to replace the NX5U with AVCHD 2.0 using the sensors from the PMW150/160. They have just been a little slow since the introduction of the PMW 150/160 likely too many NX5U's in the channels !!! The combination of my NX5U and now FDR-AX1 will do me unless a large sensor 4K comes out with better low light than the FDR-AX1."

Posted by Michael Murie at 8:31 PM