The Panasonic AG-AC8 and other news 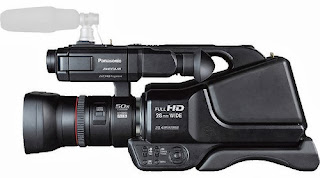 A price has been finalized for the Panasonic AG-AC8, a budget shoulder-mount camcorder. It looks like it will retail for $1,200 in the US. It replaces the AG-AC7, and Panasonic's latest press release says it will ship in October.

Make no mistake, it's a stripped down camera, but it does include dual recording slots with either simultaneous or relay recording.

I have the much earlier AG-HMC70P. For some situations, it's great to have a shoulderable camera, and for the price, the AG-HMC70P was great. Especially because it had two XLR audio inputs (which I wish the AG-AC7/8 had.) The thing I'd complain about with the AG-HMC70P is that you really had very little image control; it is really a full auto camera. I haven't used the AG-AC7, so I don't know what these models are like.


I would really love to see how this lens does against a $47,000 + tax cinema lens like the Optimo 15-40mm T2.6 because I honestly think it would come close. Blackmagic must share a similar philosophy, because the Blackmagic Pocket Cinema Camera gives an image that in many ways exceeds the $15,000 Canon C300 especially when paired with the Metabones Speed Booster.

Can your iPhone really be a light meter | Ryan Walters


If I were able to have a protective case on my iPhone and still use the Luxi, I honestly would consider using this as a replacement for my professional meters. However, the one major feature set that my professional meters have over the Luxi is adaptability. Not only can I create and display custom camera profiles for every camera I use, but I can adjust every setting with finite detail.


When it comes to cameras, there's more options now than ever before. That's great for cinematographers, but it leaves camera assistants struggling to wrap their heads around a staggering number of camera systems. Inevitably, you're going to come across one you haven't even touched before. So, how do you handle it?


New York has become a national leader in tax breaks for the film industry, and records obtained by Gannett through a Freedom of Information request showed that some of the tax breaks go to shows and movies tied to New York City. They included “Sex and the City 2,” HBO’s “Bored to Death” based in Brooklyn and “Saturday Night Live”.


Model maker/collector and photographer Michael Paul Smith is a master at recreating incredibly accurate outdoor scenes using his extensive die-cast model car collection and forced perspective.Mixing up miniature cars, detail items and buildings into a scene whose backdrop is the real world, he shoots the gorgeous miniature vistas of the town he has created and named “Elgin Park” — and he does it all with a cheap point-and-shoot.

Amazing Panasonic Handycam i really clicked a lot of pix ,,,such an great exp. of this camera