(SR5) New NEX-FS700R and NEX-FS700RH camcorders to be announced soon too | Sony Alpha Rumors
Practically no details about a suspected enhancement/replacement for the Sony NEX-FS700.


First we setup the Flares. Flare refers to how some of the light coming through the lens bounces around causing and overall increase in the brightness level this causes the blacks to get lifted from the zero point  and the flare adjustment brings the blacks back to zero. This is done by shooting a properly lit grey scale chart, you then using a WFM set the lens exposure an set the green flare adjustment so that the 2 black chips are at zero then overexpose the lens by one stop. 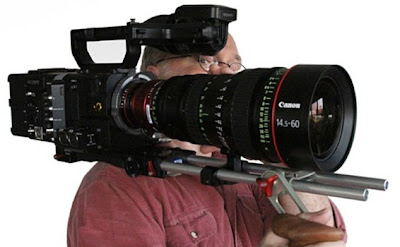 
In this Cine Gear 2013 presentation, Cinematographer David Leitner discusses his experiences shooting "hand-held" with various camera systems, and focuses on his experiences using the PMW-F5, F55, and NEX-700 in various configurations.

OPINION: WHY THE PRICE DROP FOR THE BLACKMAGIC CINEMA CAMERA AND WHAT IT MEANS | Rick Young | Movie Machine
We're all still a bit shocked that Blackmagic has dropped the price of the original Cinema Camera to $1,995 (which is less than the Kickstarter price for the Digital Bolex):


Usually a price drop of such magnitude is an attempt to clear inventory for a new model, though I don’t think for a moment this is the case here. I believe there is a something else going on here which reaches to core of what Blackmagic Design are about as a company and reveals a strategy which is destined to succeed.


The camera wasn’t the newest model–the engineers in Toronto need all the newest parts for development–but it was the same camera we shot still tests on in July, updated with the latest firmware. Firmware which was written for the newer boards, so Mike wasn’t sure how it would run on the old parts

Final Cut Pro Is Dead (Or Why I'm Stuck With Premiere) | Ryan Walters
Ryan explains why he's convinced to stick with Premiere rather than Final Cut Pro X, though he seems to ultimately justify it based on something else:


And, since I cannot buy and own only Photoshop, I have to subscribe to a service that comes with the one program I need, and others that seamlessly integrate with it. Why am I going to shell out even more money for a separate editor? It just does not make financial sense to pay twice for the same thing...

Light Leaks | Vegasaur
They appear to offer a set of free light leaks; though I haven't tried them:

Why Do We Want Better Cameras If We Keep Making the Photos Look Worse? | Peta Pixel
We're not attempting to capture reality, just what we wish reality was....


The most obvious manifestation of this phenomena is the enormous popularity of Instagram and its nearly requisite filters. It’s almost not an “insta” if you don’t apply a filter. This trend is so incredibly pervasive, that it gave rise to the #nofilter hashtag. As if one couldn’t believe a sunset could be so fantastic as to not require the use of a filter!


Meet Donald Morgan, winner of seven prime-time Emmys, one of the most sought after cinematographers in the film industry. He recently spoke with EBONY.com to share insights about his illustrious career.

Interview Challenge: OMC vs. Dolly Crew | Vimeo
This is kind of interesting/amusing, though I'm not sure you'd compare a full dolly to the One Man Crew...more likely a cheaper slider. Despite the fun ad, unfortunately it doesn't appear to be shipping yet,

Interview Challenge: OMC vs. Dolly Crew from Redrock Micro on Vimeo.
Posted by Michael Murie at 6:30 AM