This is the gadget from NAB I want... 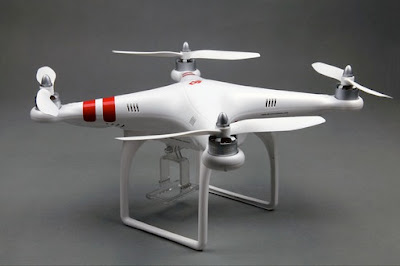 I've been trying to get a camera up in the air - whether with a kite or a jib or what-have-you - for a long time, with not much success. So this under $1,000 quad copter that takes a GoPro Hero, the DJI Phantom Quadcopter, really appealed to me when I first saw it (just a week or two ago.)

And now at NAB they are showing a little gimbal for the thing which will also cost under $1,000. NewShooter has the demo: NAB2013: DJI INNOVATIONS PHANTOM AERIAL COPTER WITH NEW GIMBAL UNIT

Join us for a great collection of Seminars this year with topics developed from feedback in our first series. Each seminar will be an opportunity to learn from a panel of accomplished professionals in a relaxed and intimate environment. The seminars include time for audience Q&A and networking.The 2-hour sessions cover a range of topics from the speakers and presentations for the first hour, followed by a panel discussion for the second hour with an audience Q&A to open the conversation.

According to former Disney animator Tom Bancroft on Twitter, Disney gutted their hand-drawn animation division this afternoon, and laid off nine veteran animators, including some of the studio’s biggest names

Editor Vashi Nedomansky has been cutting with Premiere Pro for features, commercials and music videos for over 5 years, now the industry is turning to him to help them get up to speed with Premiere Pro. Learn why Vashi chooses Premiere Pro and why he believes the continued refinement in Premiere Pro Next makes it best choice for editing.

Lightworks, a cross-platform video editing program from Editshare, has a working alpha version of their Mac NLE they showed off at NAB. The $60-per-year program aimed at professional editors and uses an old-school film editing nomenclature: you work in bins, reels, and racks. Robbie Fleming shows Chuck Fadely how it works.

Audition CS6: Reduce Noise (Video) | Larry Jordan
I link to this in the hopes that it might work for you...though I can hardly ever seem to clean up noisey audio when I need to...

This is an excerpt from a recent PowerUP webinar: Repair Bad Audio Using Adobe Audition CS6. We never intend to record bad audio, but, sometimes, weird things just happen.In this Adobe software video training excerpt, I show how to reduce the background noise of an audio clip. There are two ways to do this – one automated and the other manual. I illustrate both in this video.

A one rack unit sized Thunderbolt dock that includes 4 independent 2.5 inch disk docking slots for inserting and mounting hard disks and SSD’s.  It features an independent SATA chip per slot so you get maximum speed. That means with a power cable and just a single Thunderbolt cable you can manage 4 disks at once!

Now before you hover your finger over the Buy It Now button like I just did, realise that Sony are still tightlipped on how much the firmware update will cost (if anything) and there seems to be some confusion too about whether the camera needs to go off for a chargeable service due to hardware changes.

Gordon Willis is regarded by all of his peers as one of the greatest cinematographers in the history of film, and for many as the greatest of all time, period. Meeting with him only served to have him rise in our esteem from previous. Without wanting to use hyperbole, between lensing The Godfather trilogy, many of Woody Allen’s best films (including Annie Hall, Manhattan, Stardust Memories, Interiors, and others) and several master thrillers for Alan J. Pakula (All the President’s Men, Klute, The Parallax View, The Devil’s own, and others)

Firmware coming soon Lots of questions about the firmware updates Canon announced a while back. A non official source has updated us on the progress of the software updates for the following 3 cameras.

Actress Who Sued IMDB For $1 Million For Revealing Her Age, Loses Lawsuit... | TAMBAY A. OBENSON | IndieWire

So, my question is, what does this mean for all you actors out there who understand and commiserate with Junie Hoang, with respect to your reliance on IMDB?