SONY ANNOUNCES PRICING FOR NEW CINEALTA 4K CAMERAS | Sony
As expected, Sony announced the list prices for the PMW-F5 and PMW-F55, and as expected, I can't afford either. Actual street price might be a bit lower... 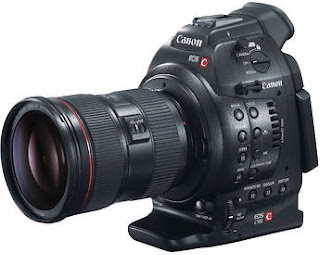 Canon C100 Review – First impressions | Paul Joy | Blog
This little camera intrigues me because it's big brother the C300 produces a great image, but I can almost afford the C100.
It does have some limitations, as Paul lists in this first impressions article. If you're interested in the camera, B & H now has it in stock.


The side grip on the C100 is the same as the one on the C300, other than the addition of the orange dot on the record button. As with the C300 the C100 comes with a cover that can be attached when the grip is removed to allow operation of the camera in a hassleblad type position (hands clasping the body). This is all well and good until if you need to access the menu system to change ISO, shutter speed, aperture etc, there’s no way to do it.

4K is Coming, Ready or Not | Michael Murie | Filmmaker Magazine


Sony just came to town doing a road show on the F65. Interestingly, they spent no time on the operation of the camera itself; the session focused on the workflow for material from the camera. The message: Avid, Adobe, DaVinci Resolve – to name a few – all work with the camera. All you need to edit is a – comparatively – inexpensive RAID array and a good graphics card, and you’re good to go.

Sony asks “is 4K worth it?” Their own research says… | Andrew Reid | EOSHD


The paper then rather unsurprisingly goes onto claim that 4K is the best thing since sliced bread and that every cinema whether large or small should upgrade. A lot of this part of the paper has to do with complex mathematics in the relationship between differing levels of human vision, different screen sizes and viewing distances.


Jacob Rosenberg, director and chief technical officer at Bandito Brothers, a full-service production company in Culver City, Calif., has had the EF model of the camera for just over two months and calls it “awesome.” “It is great that a hardware vendor who is in the video space and understands the needs of video professionals is putting their efforts into creating a device like this,” he begins.


High resolutions and frame rates are impressive, but where the HERO3: Black Edition really shines is in the less discussed subtle improvements from previous models. After testing this camera side by side with the HD Hero2, it is apparent that three major features have been significantly improved: the in-camera audio, the low light capabilities, and the internal menu usability.


We already know the pricing of Creative Cloud for Teams – it’s going to be US$69.99/month per user, based on an annual subscription. That’s $20 higher than the standard Creative Cloud member­ship, and Adobe says the reason it will cost more is because the product will be delivering more.


In this tutorial, I'll show you how to do sky replacements in DaVinci Resolve. In the past, this was a cumbersome task that either sent you into a compositing application or took several nodes to accomplish. With only 4 nodes, I'll show you how to add a new element into the sky of your shots. You'll be able to add sun, moon or clouds to your skies.


Want to learn how to create day for night effects using After Effects? In this episode of "5 Minute FX," wel'll show you how to shoot during the day but turn it into a night scene using the magic of scale and placing, rotoscoping, and color correction in After Effects. Will he get it all done in only 5 minutes? Watch and find out!


"The first camera they brought out had an electronic viewfinder and that for me is anathema. I just can't work that way and Arri was always intending to bring out a studio camera with an optical viewfinder, but because of the economic times they pulled back doing it. So we had the first two prototypes with the optical viewfinder. I basically think digital now has more advantages than film."


On set, dailies were viewed on iPads and then on PIX off-set. “I was able to pull up and view the 5K master files on the on-set OUTPOST cart itself. This new approach enabled makeup sfx, hair, wardrobe and the executive team to analyze footage and make adjustments on the fly.  We were able to catch any issues that arose up front, rather than finding them down line,” Lippard explained.