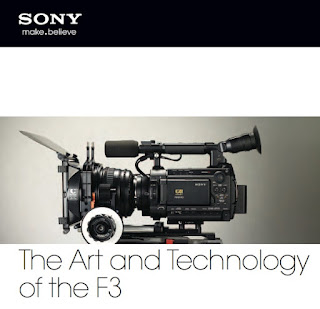 The Art and Technology of the PMW-F3 | Sony | Facebook
Sony has released a new brochure on the PMW-F3 :


Before the iPhone I was very interested in camera phones and Japan was leading the way with stuff like the Sharp 903. It had an optical zoom, auto-focus and 3MP sensor as far back as 2002. The initially very poor 2MP camera on the first generation iPhone in 2006 made me think twice about getting one but I did anyway because the rest of it was lightyears ahead of the competition. Nokia meanwhile have long had a line of top end camera phones but not the same fluency in smartphone OS design or the broad range of apps like Camera+, Filmic Pro and Instagram.


Seagate has successfully acquired a controlling share of LaCie stocks. The provisional price of €4.05 per share could increase to €4.17 if Seagate manages to accumulate 95 percent of the company's stocks in the next six months. As of now, however, it hold just shy of 65 percent, enough to take control of the French manufacturer.


Taster of soon to be released documentary about lead singer/ songwriter of Turin Brakes’ Olly Knights and his attempts to break his writer’s block which spanned many years by going back to complete basics and recording a solo album in his own home using old analogue gear from ebay.

Meet the 2012 Sundance Filmmakers #36: Mike Birbiglia, "Sleepwalk With Me"
| Indiewire
An interview with comedian Mike Birbiglia about his first new film:


This article was suggested by Kiara Lovisetto, a newsletter reader in Italy, who wanted to know how to get video to pulse in time to music.
While we can’t do this in any version of Final Cut Pro, we CAN do it in most versions of Motion, starting with Motion 2. While easy to do, it is NOT obvious.

How You Turn Music Into Money in 2012 (Spoiler: Mostly iTunes) | Robinson Meyer | The Atlantic
Very interesting to see where the income on the web is:


The avant garde cellist Zoe Keating has allowed us see her revenue model. Earlier this summer, she posted the details of her Spotify earnings, revealing that every time someone listened to one of her songs, she made about three tenths of a cent. She also posted her iTunes earnings at the time.