Canon has gone and announced the baby brother to the C300, the C100:


The Canon EOS C100 EF Cinema Camcorder (Body Only) inherits the design concept of the EOS C300, which put DSLR quality video in a groundbreaking form factor with the key features of a more traditional video camera. The C100 has been optimized for run-and-gun and one-man-band style shooting, a specialty of event videographers, documentarians and independent filmmakers. This camera is about 15% smaller than the C300, and yet its 1080p image will hold-up nicely beside that of the more expensive camera. The C100 even has a few features not found in the C300, like One Shot AF, Push Auto Iris, a built-in microphone and non-compression HDMI out with superimposed timecode and 2:3 pull down marker.

With built-in ND and half the price of the C300 (estimated $8,000) it will make an interesting competitor to the Sony NEX-FS700. I think this will be very popular; there are a lot of people that really wanted a C300 but had a hard time with the $16,000 price.

I've only had time to scan the info so far, but the only real downside to me - and it's not really a big one - seems to be the AVCHD compression format, and I don't think that would give many people pause, particularly as it outputs uncompressed video...

It doesn't have the high-frame rate of the Sony NEX-FS700, but I could live with that too...

The C100 fuses Canon’s proven video technology and lens heritage with the creativity of the Cinema EOS System. As an EF mount camera the EOS C100 accepts Canon's EF and EF-S lenses for DSLRs, plus the EF mount Cinema Lenses to provide videographers with a wide choice of creative shooting options.


A new graphical user interface enables videographers to conveniently adjust standard camera settings using the LCD screen. Operators can fine-tune Gamma settings, with the camera displaying both ‘before’ and ‘after’ curves on-screen, while White Balance settings can be altered using the camera’s joystick lever, with a colour/plane graphic displaying the amount of compensation being applied in real time. Additionally, support for continuous, automatic focus and iris adjustment will be added by a firmware update in 2013, providing fast, smooth performance when used with specified models in Canon’s range of EF Stepper Motor (STM) lenses.


While it shares much with the C300, it features the AVCHD codec instead of the add-on monitor/XLR part of the C300, as well as a flip-out screen at the back of the camera – much like we have grown accustomed to from other Canon DSLR cameras like the 60D or 650D. 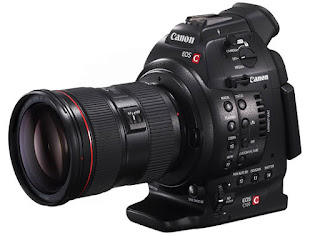 
...the major compromise is the codec which is now AVCHD at 24Mbit 4-2-0.
However HDMI is uncompressed so for effectively another $300 you can record broadcast standard material to a Blackmagic HyperDeck Shuttle in ProRes.
I really like the C100 at first glance. But will it be enough to compete with the FS700?


Basically it's a compact large sensor cinema camera just like the C300, but it lacks some of the C300's features.
The C300 is a stunning camera. Although there are other cameras that have a higher bit depth and codec quality, the C300 is lowligt strong and produces a very nice and sharp picture that competes with higher end cinema cameras.


While I agree this is the lowest price of the EOS
line, many will quibble with the idea that this is priced for the beginning filmmaker. It very well could be a great price for some wedding filmmakers or schools that are looking to have low-priced cameras for their students. But then again, the HDSLRs are also in that category.


Like its C300 sibling, the EOS C100 employs Canon's uniquely designed Super 35mm 16:9 CMOS sensor that captures individual R, G, and B channels for each full HD 1920 x 1080 frame. This high-sensitivity CMOS sensor provides creative depth of field capabilities for an excellent "bokeh" effect, and provides an ISO range of from 320 to 20,000, enabling the capture of images in low light with minimal picture noise.

Posted by Michael Murie at 7:21 AM