Canon 1D X Has Sharper Video Image Than The 5D MKIII – Comparison Video
| Dan Chung | DSLR News Shooter
Note that this is the $6,799 1D X he's talking about, not the upcoming 4K 1D C; does anyone else get the naming of these cameras confused?:


Quite what Canon engineers have done here is unclear to me but I suspect that the fact that the 1D X uses a 18 megapixel sensor versus the 5D mkIII’s 22.3 MP one makes a difference. They may simply have come up with a better video processing algorithm or perhaps there is just a different default level of sharpening (as zero on the camera’s menu is a purely arbitrary calibration anyway). I think that there is more to it than sharpening though as there are no signs of halos or other negative effects.

'Roots' - Shooting on the Sony F65 | David Procter | Blog
Post on using the F65, [Note: the blog doesn't allow links to articles, only to the site itself]


Workflow-wise I had tested the S-LOG RAW 4K with Mission Digital & Dirty Looks but in the days leading up to the 'Roots' shoot Sony released the SLOG2 update. This opened up an array of new options for recording compressions. After some further testing with DIT Mark Kozlowski at Filmscape Studios, we opted for SLOG2 RAWLITE which seemed the best compromise of quality and file-size, in the region of 10GB per minute, as opposed to around 17.5GB per minute of the full RAW. Safe in the knowledge that we had no heavy postwork, I felt comfortable that the smaller file sizes, giving us more valuable stock, so to speak, was a worthwhile trade-off.

Behind The Scenes Making of "Underwater" Music Video | Karl Taylor | YouTube
Karl provides lots of interesting information about how he shot a music video:


This is a behind the scenes look at the making of "Underwater" Music video for singer Colette Falla.
I just put this together to demonstrate how we put this project together and did it on just DSLR cameras and lenses with no budget!


Al Mooney (@al_mooney) has extensive technical, sales and marketing experience in the media industry. As product manager for Adobe Premiere Pro software, Mooney is responsible for defining, delivering, and supporting the overall feature set and functionality


This is the newest member of the Switronix Torch LED family. It’s called the BOLT.
It’s 1/6th the size of a 12 inch LED Panel and it’s 2 times as bright. No kidding.
It has two dimmers – one for the 32K set of LEDS and one for the 56K LEDS. You can control them
separately or blend both the tungsten and daylight LEDs together to deliver a very bright light with a color temperature of around 41K.


A “Hell” of a deal, the end of the world, a magic monkey and a plaid sheep — these are the first projects selected for the Amazon Studios Series Development Slate. One is a children’s show, three are comedies and all four were discovered via the Amazon Studios site. (Learn more about how to submit your own ideas here.) All receive $10,000 option extensions.

The First Wedding In the World Filmed With Ultra-High Definition 3D Cameras
| Gizmodo
Overkill or peek at the future? My vote is overkill:


Gizmodo's friend Peter Chang—from Golden Gate 3D—sent us the teaser trailer for the world's first 3D wedding video shot in stereoscopic 3D on 5K resolution RED Epic cameras. They didn't take any photos, as "each frame can also be extracted as a high resolution 3D still image." That's a technique that some photographers are using now with mixed results—although most photographers don't film with RED Epics.


Kim Gottlieb-Walker, a talented still photographer and member of the IATSE Local 600 International Cinematographer’s Guild, has made available a guide on setiquette written by several veteren crew of the camera union.

Failure FTW with Ted Hope and Ed Burns | Vimeo Festival + Awards
From Vimeo's recent awards, a talk with Ed Burns and Ted Hope talking about working as a creative:


Not succeeding plays a hugely important role in the creative process. This session features Ted Hope and Ed Burns discussing the importance of embracing failure in creative work, with postcards from their own personal dark days—jobs that went wrong, ideas that fizzled out, expectations decidedly unexceeded—and exploring how failing miserably is crucial to artistic achievement (and even finding happiness). 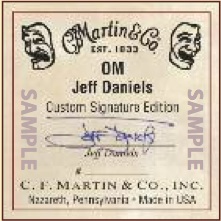 Martin Guitar unveils Jeff Daniels custom guitar | Dustin Schoof
| The Express-Times
I can't usually put in links to articles about guitars in a video blog, but this is a guitar for actor Jeff Daniels, who is starring in the new HBO series Newsroom:
Product booklet: The OM Jeff Daniels Custom Signature Edition [PDF]


Upper Nazareth Township-based C.F. Martin & Co. has announced its new Custom Artist Edition Guitar, the OM Jeff Daniels, according to a news release. The guitar was designed in collaboration with the singer-songwriter and "Dumb & Dumber" star, according to the release.