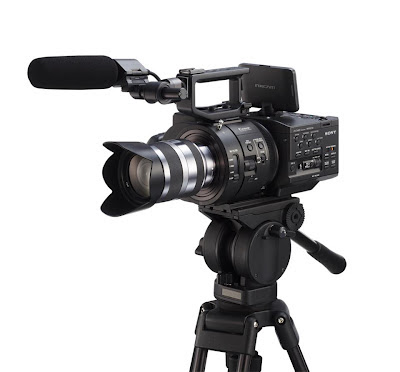 NEX-FS700
As seems to be a habit for Sony, they pre-announced some cameras yesterday - a good two weeks before NAB. Sort of ruins the whole, surprise, doesn't it?

The NEX-FS700 looks interesting; I liked the FS100 but I really wished it had ND filters so that I didn't have to bother with ND filters in front of the lens. Sony has listened to me! (and lots of other people that mentioned this short-coming when the FS100 was released.) Oh, and thrown in the promise of 4K as well.

One of the things I like about the Canon C300 is the built-in ND, though the built-in Canon mount is attractive too, for someone with a collections of Canon glass.

So maybe now I can go back to lusting after a Sony. The only wrinkle; I suspect that the FS700 will be several thousand more than the FS100, putting it out of my price range.

Perhaps the FS100 will come down in price, and I'll just have to make-do?!

Den Lennie got to spend some time with the camera: Sony NEX FS700 on Location 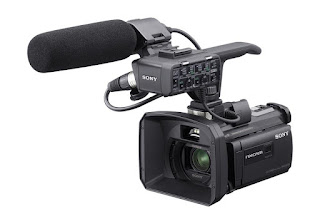 If you're looking for a small, portable camera with excellent image-stabilization, Sony now offers this one:

The HXR-NX30U is planned to be available in June for a suggested list price of less than $2,500.
Sony’s New Palm-Sized NXCAM HD Camcorder Takes Image Stabilization To A New Level

The PMW-100 supports full HD video at 1080i, 1080p and 720p up to 50 Mbps MXF record and playback based on the MPEG HD422 codec using the standard MPEG HD422 Long GOP compression technology. It is also switchable to MPEG HD420 35/25Mbps or even DVCAM 25Mbps recording, which similar options in the market do not offer. The PMW-100 can also record high quality 24-bit four-channel audio at uncompressed 48kHz, ideal for pairing with the new optional ECM-MS2 stereo microphone.

Posted by Michael Murie at 2:05 AM