I saw the Tintin movie - in 2D - the other night. I went in optimistic that it would be a good evenings entertainment; unfortunately, that wasn't really the case. In the interests of full disclosure: I was never a reader of the Tintin books. Though I was aware of them - and had glanced at them once or twice years ago - they never grabbed my attention. So I really knew very little about Tintin at the beginning of the movie, and came out knowing very little more.

Tintin is also bring distributed in 3D (stereoscopy), but I won't be talking much about that as I only saw the movie in 2D. I will note that when watching the movie in 2D there was never a point where I felt "this is a stereoscopic set-piece" - a scene that was obviously composed to create the maximum stereoscopic effect. I've always found those scenes a little annoying in stereoscopic movies, and I even noticed it in the recent Hugo, so points to the producers for not doing that in Tintin.[1]

But Tintin is a step forward in 3D animation, with some very human-like character performances. I've read articles talk about the "uncanny valley"; how 3D animated characters can be disorienting when they are almost human-like, but not 100% natural. Watching older movies like Toy Story or Polar Express, that seemed a more than obvious concept, because the human characters never looked human. But Tintin, the lead character, makes that jump to near-humaness.

For the first fifteen minutes or so, I spent a lot of time marvelling at the Tintin character and how life-like he was. Certainly, there were many times where it was possible to say 'oh, that's an animated character,' but there were other times where it felt like he was 100% real. Even if they were only flickering moments. Interestingly, Tintin was the exception in the movie; most of the other characters seemed more cartoonish in execution. Only the evil opponent Ivan Sakharine came close to rivaling Tintin's humanity. I'm not sure if the caricature's supporting cast hurt or helped the main character's attempts at realism. 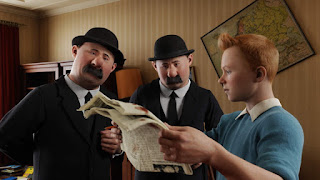 Tintin is almost human, his friends, not so much.
Moving on to the story - and character himself - most of the story is one long chase scene. Like the books, there's no explanation of who Tintin is; is he English? French? Belgium? Other questions also go unanswered: How old is he? How come he lives alone? How did he become a reporter? How did he become relentlessly enthusiastic? Maybe a movie about how Tintin became Tintin would have been more engrossing than the non-stop adventure of this movie. There's other problems too; the movie seems to be undated, though it is likely set sometime in the 30's. Yet Tintin refers to Interpol, which only went by that name from the mid 50s.

Tintin also has a terrible habit of explaining everything to his dog, which makes for rather one-sided monologing. Certain points were laboriously explained, while others were brushed over; on seeing a picture of a model ship they were attempting to recover, Tintin notes that the image is distorted and the glass must be bullet-proof. Later on, a close-up of the glass at the edge of the case reveals a "Bullet-Proof" logo.

While Tintin lacks a noticeable accent, most of the supporting cast have pronounced English accents, yet the street and automobile scenes at the beginning are European, not English. When they are saved by Legionnaires in the desert, their commanding officer speaks with an English accent. Can you only make fun of English nationals these days?

On the plus side, there were some very amusing slap-stick set-pieces, and some ingenious action sequences and the first half of the movie was promising. But at some point, the lack of anything but a chase made the movie boring, and for the last fifteen minutes I was wishing that it was over. It also started to feel a bit too much like the Young Indiana Jones Chronicles, meets MacGyver, with a red head.

Things weren't helped towards the end when Tintin, who spent most of the movie a relentless, optimistic, advertisement for Ritalin, suddenly decided to pack it all in and give up, prompting his companion, Captain Haddock to deliver a speech about "never giving up." The fact that in the first three quarters of the movie it was Tintin who never gave up, and Captain Haddock who abdicated any responsibility, may suggest this was supposed to be an ironic comment on the character traits of the two, but it didn't play that way.

And then suddenly the bad guy is captured, some treasure is found in an unexpected place, and a map to more treasure is found, and...that's it! It's all wrapped up in five minutes, in a very unsatisfying way with a suggestion of a sequel. I don't think I want to see the second half of this movie.

In conclusion, they've almost got the 3D rendering of humans down pat, they just have to inject some humanity into the story.


[1]. I'm deliberately using stereoscopic rather than 3D when describing the projection of the movie because the movie itself is a 3D animated movie, and I'm mainly interested in that aspect of the movie.