NOTE: This is intended to be a review of the Push Pop technology, not the actual content of the book. 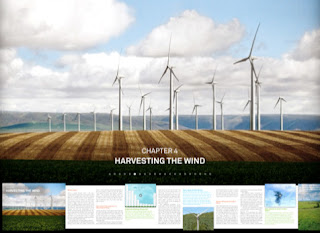 I was intrigued, so I downloaded the interactive book "Our Choice" app from Apple's iTunes store. It's $4.99, and if you have an iPad, I'd recommend checking it out. It works pretty much exactly as demoed in the TED talk previously metioned. If nothing else, it will make a great demo to any non-iPad owning friend!

Unlike iBooks books, which are purchased separately, but are read in the iBooks app, the Our Choice app is a single application that only displays the Our Choice book.

On iTunes, it's listed as being 52.8MB, but once I opened the book and started paging about, it seemed to be downloading the later chapters in the book, it displayed a progress bar as I skipped to those chapters and I hate to wait until it had finished to view them. This took a few minutes to complete, but once done that first time, jumping to those pages is instantaneous.

I do wonder how big the actual book is, and whether that content stays permanently on the iPad. Can the publisher change content after the fact? Does it ever get purged?

The book is only viewable in horizontal orientation; it doesn't flip if you turn the iPad to vertical orientation. I'm not sure that's a bad thing; but it might annoy some users.

Videos and still pictures that appear as an insert on the page can be expanded to full page by using two fingers to expand, then pinching to shrink back. But some of the images are full screen to begin with, and I often found I'd pinch those out of habit; which returned me to the chapter navigation page!

All in all it's an interesting way to present material...I don't think I want everything to come this way, but for some material it can be quite effective. I'm curious to find out what their publishing model is.

This video is played when you first open the app: