More on the Panasonic AG-AF101

Panasonic Europe posted a short interview with Barry Green about the new camera. In case you didn't read his write-up about it on dvxuser, he loves it! (you can read his write-up about it at dvxuser here: hands on the Panasonic AF100. [I don't know what lighting/camera they were using to do the interview, but it's some pretty awful video; his forehead is badly blown-out!]

Urbanfox.tv updated their post about the camera, with these comments about some video they saw shot with it:


Someone from Panasonic in Germany shot a performance/theatre piece, with lots of nice shallow depth of field, and not a lot to trouble the codec. But, the pictures looked very filmic, there was no video harshness, the colours appeared to be very accurate. It was restrained, not flat, but not in your face. 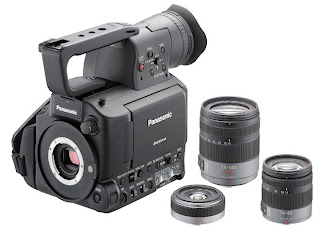 
Film and Video Producer, Barry Green commented: "The AF101 promises a huge step forward for cinematographers who want a cost effective camera that delivers the look and feel of 35mm film, but without all the compromises and headaches that come from shooting on DSLRs. It lets filmmakers and video professionals seamlessly achieve the cinematic look they've long sought after, without having to resort to using light-hungry add-on lens adapters, or trying to work around the shortcomings of using a stills camera for a video application.”