Rodney Charters at the SuperMeet

At last month's Boston SuperMeet, Rodney Charters, ASC, DP on the series "24," was one of the stars of the show. He spoke in a seminar earlier that day, as well as at the SuperMeet itself.

Little did I know that Rodney is also a former Kiwi, who as a student in London got his first job at the BBC. He had a chance at a job to relieve crews during the summer, but the only job they had available was in audio. He thought, ‘what the hell,’ and ended up at Ealing Studios as a dubbing recordist. 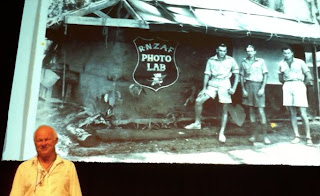 Rodney Charters with a picture of his father taken during World War II
The following quotes are from the seminar he gave prior to the SuperMeet. He covered all kinds of things, from focus pulling with still camera lenses vs film lenses, to the recent House finale. He gave tips on ISO settings, and Picture and Sharpness settings (dial Sharpness down to 0 to avoid moiré,) and even said that the studio accused him of costing an additional $500,000 for staying with film for the final season of “24.” He also showed a few clips from “24.” This was revelatory for me as I had no idea the amount of stuff they do with plates and green screen. They don’t shoot in New York at all; they shoot lots of plates and then green screen almost everything.

The session was sponsored by Canon, and centered around the Canon 5D and DSLR film making. Here’s some of the more interesting things he had to say:


In my history with this business, this is probably the most significant, crazy thing that’s happened. You have major clients telling commercial houses that they have to shoot on this camera and they are going crazy. Panavision might go out of business.

One of the things that’s significant about this camera is that it’s absolutely silent. No fans, no nothing. And when you’re working this close to an actor, that’s a really significant thing.

[they aren’t right for everything] But if you’re trying to hide in a pub and shoot two actors secretly and you don’t want to pay locations fees and all that kind of thing, this is the baby. This is the one.


What’s nice about it is it does great skin tone. The latitude is not that great, but if you light for it you can achieve magic results.

…it has really high speed compared with film. I maxed out at 1000 on my stock. I had 500 ASA film, I could push it one stop and in the lab we went and extract another half a stop or so out of it in post, but to go any further was just to ask for golf balls.

Canon doesn’t quite know what to do with this camera. They want to sell 30,000 cameras a week and we represent maybe, well in the case of the RED they’ve saturated the market and sold 8,000 cameras. That’s it. This is not the business Canon wants to be in, but at the same time they can’t ignore this kind of publicity.

On the House finale


To the rest of the industry in Hollywood and around the world, this was just a huge blow. Because although we knew the camera made beautiful images, we never thought anyone would be so bold as to go for it in such a big way.

They had a 50mm 1.0 they found in a museum somewhere. The focus pullers hated it. Hugh Laurie did get a little testy because they missed [focus] a few times.

One of the things that’s strange about the Canon combination of; this codec that’s not so great, the large chip size, compressing it down and throwing away a third of the lines, all seems to result in something which is not that unpleasant. Nobody really complains about this. Eighty million people watched that episode around the world and nobody wrote in and said “Gee, I saw banding and stuff…”

In House, every time they pointed a flash light in the smoke, they got banding around the light. It couldn’t handle the amount of changes that were going on. Those kind of things exist, but nobody notices it in the heat of the drama. They added smoke because they thought the Germans, who have a lot of quality control issues with American product, might notice it and refuse to buy it. That stuff happens, trust me, I’ve had those calls.


Who has a Z-Finder? This is the first thing you should buy. […] This transforms this thing into an actual beast you can look at, especially in bright sunny days […] When you put it up to your head and switch to video mode and you suddenly just disappear into that world. That’s one of the beautiful things about being an operator, this kind of strange quality that you get.

Have you ever seen anybody get shot? Video or news film of some poor schmuck aiming at a solider who’s aiming at him and he just keeps on filming because you go into another space…

HDMI is probably, arguably one of the worst pieces of plugging that’s ever been made! You use it once and maybe it will be okay…The first thing that fails is the cable, the second thing is the body gets broken. In addition to that, they’re limited to 30 feet.

[A question about drift] over five minutes, nothing. Yes under different temperature conditions, these are not crystal locked. But I have to tell you, in editing, out editors would sit and listen, and they’d get the best audio track, and then they’d force picture to match it. […] They want the best of everything, and it doesn’t necessarily happen that the dynamics visually in the frame were as good as the actual audio part of the dialog, so they’ll just take it from another take to make it work. So all this worrying about sync is kind of moot when you hear that stuff going on.


The [Canon] glass is great, there’s no problem with the glass, but they’re not really designed to do what we’re asking them to do.

I like zooms. Optically there’s nothing really different about them now. Yes the primes resolve a little bit better, but you’re not going to notice the difference in the heat of the moment.

On the 12 minute limit


…how many times have we slaved through a scene, and gone to five or six takes, and been spectacularly happy with the sixth take, it’s beautiful, and we go in the edit room and there’s take one. And the director will say “Didn’t you look at take six? Did you see the notes?”

“Well, I didn’t have time. Did you really want six?”

That shit happens, and the more you shoot, the worse it gets.


You can design your own color profile, but be very aware. Because immediately people got this SuperFlat they started to say “well, skin tones started to change.” Not all the time, but if I changed my ISO, it wasn’t consistent. And suddenly I’ve got blemishing.

I can’t tell you how irrationally insane this becomes when you’re dealing with an actress who’s costing you 20 million dollars for a picture, and she has final approval on you getting to shoot with her again, and she sees something where her lips are shifting color because of whatever you did to the camera. That becomes really, really critical. So leaving this stuff alone is smart. If you like what you see with the Profiles they are giving you - other than the sharpness, the contrast and the saturation - stay with it.

On the impact for film making


One of the things that I find really satisfying [about these cameras] is that you can actually be photographing, and people don’t know you’re photographing. Who saw Up In The Air, the weding scene? It was all shot 5D. And you actually see the guys in the room photographing, and you think they are shooting stills; as they’re all dressed in tuxes, and there’s two or three of these guys. But that’s actually the footage they were shooting.

This has taken it to a whole new level where for ten grand you can be up and running. If you’ve got a good idea – and don’t neglect the idea. I’ve been judging some of these competitions. One of the sad things is that much of what you see is extraordinarily beautiful, well filmed, but the story sucks, and the acting is even worse.

Keifer went on and on about not liking little cameras because he never felt he could rise to the level of performance. He wanted a big Panasivion matte box and then he knew that he had to nail it at that level. But at the same time I think there are other people who might give you more because they don’t have the sense that it’s part of a motion picture that they’re shooting.

[The ASC] had a big BBQ and Roger Deakins was there, and I was with Vincent Laforet and I introduced him. I said “Roger this is Vincent, he shot Reverie, the first movie that was ever shot with the 5D, and then it went global and now we’re all using these cameras. Have you used them?” and he said, “I’ll tell you, on my last movie I set up a shot with a 5D, and called the actors in, and we were all ready to shoot, and then I thought about it and I thought ‘No I can’t do this,’ because I think that this is my last film that I’ll ever shoot on film.”