I'm intrigued by the Sanyo VPC-WH1, as I'm about to embark on a project that might involve getting a little wet. For about $350 the VPC-WH1 gives you a 720P camera that shoots underwater down to 10 feet. Rob at TorontoWalkAbout has a pretty favorable, and in-depth review with some good examples of the footage you can get with it. His sample clips can also be found on YouTube here - the clip part way through starting at the fence and going underwater is pretty amazing... And PCWorld gives it a 70 "Good" rating in their review.

Downsides? image quality, image quality, and terrible still image quality. I don't really care about the latter, as I hardly ever use a video camera to take stills. And sure it's 720p, and even at 720p there are problems with the image quality, but the ability to get the camera a little wet is very appealing for some things. The image stabilization - which is digital - also gets some criticism. Again, it's something you can probably live with.

It's got generally favorable ratings from owners on Amazon - mostly with caveats about image quality - though I was concerned by one user that wrote that the o-Ring seals aren't replaceable, and that the manual specifically tells you that they are only good for one year. Ouch! Unfortunately, I couldn't find a copy of the manual online, so I can't confirm this.


A nice alternative might be the Canon PowerShot D10. (It's $290, so about $40 cheaper than the Sanyo.) Engadget has a review that's favorable (though I thought I read somewhere else that the camera doesn't record audio.) If you want stills, this is the camera to buy, but for video, it's limited to 640 x 480. Maybe/hopefully, they'll update the camera and goose the video mode to 720p? That would seem to be the logical thing to do, and assuming the camera is popular, I wouldn't be surprised if the next update adds that. But do I want to wait?

Another alternative would be to buy an underwater enclosure, but those are expensive...

But wait! I was literally finishing up this post when I came across the Sony "Underwater Use Sport Pack for Camcorders" which is selling for about $160. 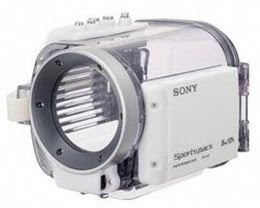 Suddenly, I'm excited! Well, mixed feelings really, as I do have a Sony camcorder; but it cost a lot more than the Sanyo and the Housing combined! Do I risk it? Or should I buy the throw-away camera instead?

There's a review on Sony's website; but just one, and I haven't found any other reviews yet. [UPDATE: there's a bunch of user reviews here.] The specifications indicate that you get several interesting things "In the Box," including: Desiccant, Anti-Fogging Solution, and Grease!