I meant to write about the Hitchcock Storyboard iPhone app a couple of weeks ago, as I'd seen it with the demo of Adobe Story. It's really quite cool. It was demoed by Jonathan Houser, who is the creator of Hitchcock. He said he got the idea for the program because he taught a class on film-making, and "everybody hates storyboarding" - everyone except Hitchcock.
SUMMARY: Hitchcock has one purpose; the creation of storyboards in a quick and easy manner - on your iPhone. If that's something you want to do, it's a blast. If not, well there are worse ways to spend $20.
To create a storyboard you either take pictures using the iPhone camera, or import them from your photo library, into the Storyboard workspace. In the Storyboard workspace you can then drag the individual images around to change the order. Each image is a Panel in your storyboard. You can set the duration of a panel (the default is 3 seconds), duplicate or delete it, and you can view the entire storyboard like a movie using the Watch function. In that mode, Hitchcock plays back each scene, duplicating the duration, as well as adding any zoom, pan, dolly or truck effects added to a panel, as well as playing any audio attached to a panel. 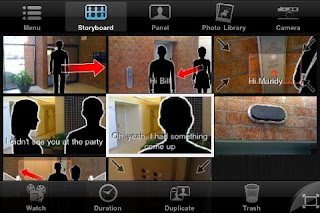 To edit a panel, click on it in the Storyboard to select it, and then click the Panel button. In the Panel workspace you can add male and female figures (in profile or face-on) as well as add direction arrows and text at the bottom to indicate dialog (or other description). The graphics can be moved, rotated and resized by dragging and squeezing with your fingers on the iPhone screen. I've had my iPhone for over a year and I was still a little amazed at how easy it was to position things where and how I wanted them. 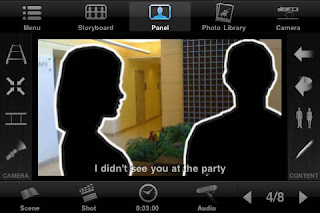 You can also indicate camera moves - truck, zoom, dolly and pans - for each panel. When you choose one, two rectangles appear on-screen, indicating the start and end point, as well as arrows drawn onscreen to represent the effect. You can also add Scene and Shot numbers using the buttons at the bottom of the Panel workspace. The Audio button lets you record a piece of audio using the iPhone's mic that will be played back during the Watch function. During playback, the motion effects are actually simulated and the audio is played; but unfortunately, you can't export this as a movie.
One aside, when Jonathan demoed the program he had it connected to a video monitor, and he played the resulting storyboard in Watch mode on that monitor. This makes for a great way to present quickly to a group of people; unfortunately he said that he was using a special custom version of Hitchcock; Apple won't let them sell an app that outputs video to the screen. 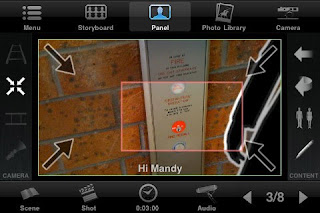 Even though you can't export movies, you can export Storyboards as a PDF, though the PDF isn't generated on the iPhone. During export the files are sent to a sever and you enter an email address and then a URL pointing to the final PDF is sent to that address; the PDF will be downloadable for 72 hours. There's talk that they hope to add an actual export PDF function to the software in a later revision, or version. They are also talking about a "Pro" version, though it's unclear what features that might have. 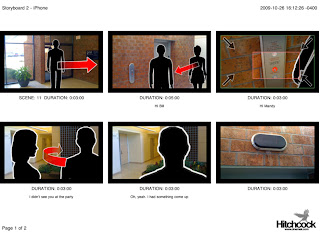 I have to say, Hitchcock is surprisingly quick and easy to use. When I told a friend about it, he was skeptical whether anyone would want to use it, but having thrown together this quick example, it really was interesting to see how easy it was to do on the iPhone. I could do the same thing with a camera and an Illustrator template, but I don't. I might actually use Hitchcock to do storyboards that I typically wouldn't bother doing, and in a way, isn't that the iPhones raison d'être.
I wish the export function didn't require going through their server, and I sort of wish that there was a desktop app that this worked with. But then again, at $20, I can't be upset about the functionality, and I probably wouldn't want to spend a couple of hundred dollars on a Storyboard application anyway.

FTC Blogger Disclosure: cinemek gave me a copy of Hitchcock; but I actually won it at the demo, I wasn't given it because I was going to blog about it.