iTunes LP – Is that all there is?

Apple rolled out an update to the Apple TV software software. This features a major change in the top menu (which now lists your own content first in each media list, rather than last) and it also now supports Internet Radio. Apart from that, there’s no real new functionality. Unless you also count support for Apple’s LP format.

I’d been curious about the iTunes LP format – kind of an interactive format for albums – since Apple had announced it, but had never gotten around to trying one out. With the Apple TV update, I thought it would be great to update my Apple TV and try out iTunes LP at the same time.

Last night I updated the Apple TV software, and also downloaded the Dave Matthews Band album Big Whiskey and The Groo Grux King in iTunes LP format. Only problem was that after downloading it and going to the Apple TV, all I could find were the movies and the songs; no sign of the iTunes LP interface. In the end I wondered if I’d misunderstood, and that it just meant you could now see the content of an iTunes LP.

Only on reading MacWorld’s article about the Apple TV 3.0 update today (well worth reading by the way) did I discover that Apple hasn’t updated all of the iTunes LP content yet to work with the Apple TV. So I’m hoping that’s the problem I had. [NOTE: Fortunately, I could still “test” the content on my Mac, and having done that, I don’t think that it’s –eventual- support on the Apple TV will change drastically my opinion of the update.]


But what about iTunes LP?
Someones’s already written an indepth article explaining the new Apple iTunes LP format. It’s designed to add extra “value” to the content, adding additional navigation, photos and lyrics, amongst other things.

I did manage to try out Big Whiskey on my Mac, and I have to say that it was a bit of a disappointment. As a fan of the band, it was kind of cool to see the graphics from the album cover expanded to illustrate the lyrics, but I couldn’t help wondering what I was paying for that. And the interface was very basic – truthfully, that’s all it really needs to be anyway, given all you’re doing is looking at images, videos and listening to sounds. Frankly, it reminded me a lot of Interactive CDs from 15 years ago. 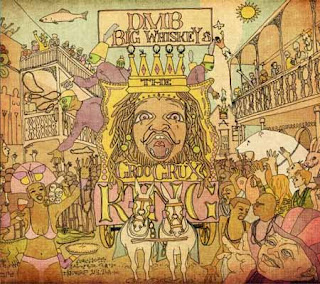 I’m not saying that’s a bad thing, but at the same time, I’m not too sure how much real value that adds. You can scroll through the lyrics (which you could find on Google) you can look at pictures (using a scrolling interface that’s a bit slow and the images aren’t very large) you can watch videos (just like in YouTube!) and you can listen to the songs. You can also have a visual presentation playing while the music plays (a sequence of still images fading from one to another.)

The videos were interesting, though probably wouldn’t be watched more than once by anyone other than a serious fans.

All in all, it’s kind of fun, but I can’t help but think it’s a bit like some iPhone apps I’ve downloaded; I play them once, and use them to “demo” to people, but never use them myself after that.


Apple Tablet
Which brings me, in an odd way, to the Apple Tablet. If rumors are to be believed, Apple may roll out a Tablet in the New Year. Apple may already be working with content publishers – maybe even comic publishers – to bring content to the Tablet. They may even use the iTunes LP format to bring content to the Tablet. The problem is that if iTunes LP is the way forward, I don’t think I’ll be buying much of that content. Yeah, I like text, I like video, I like audio, and some things are really cool and useful to interact with but I’m coming to the conclusion that interactive media doesn’t work as a replacement for a lot of “traditional” things (plain text, movies, music.) It just adds an extra layer of complexity with no real added benefit other than clicking things.

It’s weird to say this, because I used to create these kind of things years ago. I was a multimedia developer doing “electronic books”. But it never seemed to take off; not in the forms that many people thought it would.

It turns out, maybe we don’t need an interactive book. We just need a good electronic book that supports video and audio and a web browser...
Posted by Michael Murie at 2:04 PM