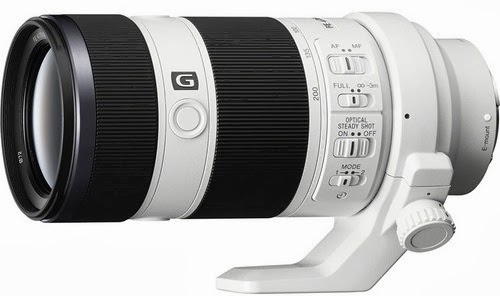 Anyway, this E-mount version features:
I've always wanted to get the Canon 70-200mm f/2.8 because...well, everyone likes it! But then you look at the price and put it off for another year.
I guess I could just buy the Canon EF 70-200mm f/4L IS USM for $1,349. The advantage of sticking with Canon is that I could use it on both my Canon DSLR and my Sony E-mount cameras (using an adapter.) The Canon has 8 diaphragm blades compared to the Sony's 9.
Am I conflicted? Sure.

For some unclear reason, Sony has gone and ditched the NEX prefix for their mirrorless E-mount cameras and adopted 'A.' I guess so people don't forget about their Alpha cameras and lenses. But the Alpha mount is different, and while you can buy an A-E mount adapter, it's an extra piece to carry around (and buy) and not an insignificant consideration. All in all, a really dumb move on Sony's part as I think it will confuse customers rather than help them.
But this new 'NEX' model looks interesting as Sony continues to improve the video functionality of their still cameras (Are you listening Canon?!)
Sony A6000 gets zebra, 16:9 screen and clean HDMI output | EOSHD


Sony have now taken their Alpha re-think to the mid-range NEX 6 mirrorless camera. For video it looks like an interesting alternative to the ageing NEX 7, adding a 16:9 screen, zebra, dedicated movie mode, new sensor and uncompressed HDMI output.


One of the downfalls of most young storyboard artists is a weak use of staging. Staging refers to the arrangement of characters or objects within your scene and the corresponding character and camera movements. Choreographing your shots and characters in an exciting way creates efficiency with the scene and will bring even the dullest script to life.


While most people enjoy Citizen Kane, many are left scratching their heads as to why it’s often considered to be the greatest film ever made. The reason is because Orson Welles broke all of the rules by placing the camera at never-before-seen angles, and moving it in strange and exciting new ways. He also made great use of a deep focus technique that keeps both foreground and background easily visible.


1 Shoot High End & Rearrange the Budget. I'm prepping a low budget feature to hopefully shoot in 2014. I told my director (Don't worry, she's on the hunt to attach the right producer) that if we shot on 35mm or the Alexa, I guarantee we would not rent Grip/Electric equipment.


Perhaps the timing is just a coincidence. But it seems at least worth noting that YouTube seems to be making moves to clean up some messes at YouTube just as Amazon is making moves to ramp up its online video advertising business.


Making a movie is relatively straightforward compared to somehow getting your film screened at Sundance — let alone finding a buyer.


As the new "Star Wars" movie gets ready for production, visual effects giant Industrial Light & Magic is looking at opening a facility in the United Kingdom to take advantage of foreign tax subsidies, the company told TheWrap on Tuesday.


In January, we reported that Alfred Hitchcock‘s forgotten documentary on the Holocaust was undergoing a digital restoration and headed for public viewing sometime in 2015. The next chapter in the ongoing discovery of Hitchcock’s Memory of the Camps is unfolding with the assistance of an unexpected member: Brett Ratner.

Optimizing your system for peak performance with After Effects & Adobe Premiere Pro
Thursday, February 27 , 2014 | 10:00 AM PT
Presented by Todd Kopriva and Steve Hoeg

If you are building or upgrading a system for editing or motion graphics work with the Adobe Creative Cloud applications, this online seminar will help you understand your options and help you get the best performance out of your software.

If you are building or upgrading a system for editing or motion graphics work with the Adobe Creative Cloud applications, this online seminar will help you understand your options and help you get the best performance out of your software.