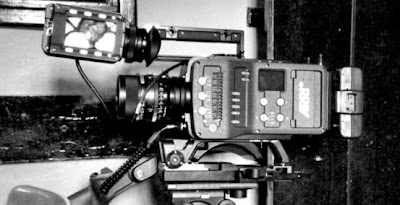 ARRI Amira update (sort of)
Back at the IBC show ARRI announced a new digital documentary camera, the Amira. It would be based on the sensor of the original Alexa, but other than that, ARRI was rather cagey about what it would cost or even when it would ship.

But they have been showing prototypes and gathering opinions from users. According to Den Lennie, he and Rodney Charters got a demo of one of only three prototype cameras last week. Part of the demo took place at Britain's oldest pub.


It turns out that the main difference between the two Thunderbolts is that version 2 has channel bonding and full DisplayPort 1.2, for full 4K video support. Whereas Thunderbolt 1 has 4 independent 10 Gb/s channels, Thunderbolt 2 combines these to give 2 20 Gb/s bidirectional channels. This leads to more efficient transfers, with less overhead, but the total bandwidth is unchanged.


The feature I like the most about Final Cut Pro X 10.1 is that Apple is committed to the program. They did not need to add all the features they did, nor as fast as they did. In fact, they could kill the entire program and not lose one iPhone sale. The fact they keep improving the program, and talking to users about what more they need to do, is a huge reassurance to me.


Several news organizations now examine the accuracy of big releases as if they were campaign advertisements, and it's not just biographies that are subject to strict scrutiny. Even the makers of the fictional thriller "Gravity" have been forced to explicate their scientific research.