Julian Smirke, First Assistant Editor on Star Trek Into Darkness was the guest at last night’s Boston Creative Pro User Group. He talked about being a first assistant editor, the process of editing a movie, and how scenes are developed. He also showed example clips from the movie.
The following are my notes from the meeting:

Julian opens with “I'm a first assistant editor, most of you are probably wondering what that means.” As an assistant editor, his task was primarily to assist one of the two film editors, Maryann Brandon. “It's a constant learning experience learning how to shape a performance, shape a story.” 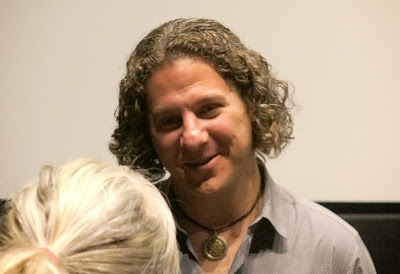 He shows a picture of his workspace at Bad Robot; he likes to work standing up at an elevated desk, though he also has a high chair to sit on for breaks.

They worked on Avid Media Composer - he said most large Hollywood movies edit on Avid. “There was a period of time five or six years ago when there was a push to Final Cut, and they both have pluses and minuses, but Avid is such an awesome system." With so many new features being added, he said "I’m still learning it.” [Note: Avid was a sponsor of the event]

They were running 12 to 15 Avid systems at Bad Robot with 86 terabytes of storage. The movie was encoded in DNx 115 and the completed project was about 150+ GB. When they started, Media Composer was at version 5.5.3, but they upgraded to version 6 during the film. He noted that in the past editors have been reluctant to upgrade during a movie: “In the past you wouldn't usually do that on a big feature, you stuck with what you've got. As technologies have gotten better and better, we've gotten more confident.”

The movie was shot it in several formats and he said that Avid handles that with no problem. Formats included: 35mm CinemaScope film, 65mm 15 perf (IMAX), 65mm 8 perf and VistaVision, that was used for an IMAX extraction. Also used was an ARRI Alexa and a lot of Red Camera footage was used mostly for video of people on screens. Some Sony F65 was used for some VFX plates. That said, most of the movie was shot on film, meaning that dailies were telecine’d and then sent over to the editors. He said that the processing house synced it as best they can, but they still need to make sure there's no problems with the sync. He says that he never trusts that the time code sync has worked because of the conversions that the footage has gone through, so he always uses the slate.

Within Aivd they kept the dailies separated by cameras (i.e. the formats), ultimately organizing the film into reels, which match the reels of the final film.

He showed some 65mm footage, which is almost close to 4by3 aspect ratio, and he explained how they have to make the decision on how this is going to be framed in CinemaScope and in some cases dynamically move the picture to fit the frame. You could see the footage move up and down in the frame as the framing was changed.

Julian then played back a sequence that was a mix of IMAX and Cinemascope footage. Some filled the entire screen, and some was letter-boxed. He said that if you had seen it in an IMAX theater you would have seen the same change in aspect ratios. “J.J. had the idea that all the outside stuff was IMAX and the inside was CinemaScope, and that's how it was projected in IMAX." He added that the best way to see an IMAX movie shot on IMAX is to see it in an IMAX theater projected on film. 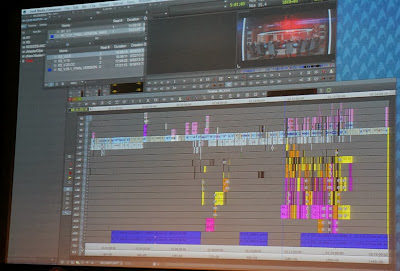 There was some discussion of film vs digital and what digital resolution you need to match the resolution of film. Julian started work editing film, and still has a love for it. He didn’t really get technical, or have a real answer what resolution of sensor was needed to match film, but he also pointed out that most movies are broadcast at 2K at the moment.

Perhaps the most interesting part of the discussion was when Julian showed how one scene evolved in the editing process – an attack on the Federation leadership meeting in a conference room. He explained that one task of the assistant editor is to put in the temp sounds and audio to make a temp mix “to help it play better.” For the first time, they were able to do a 5.1 mix as they were working. This had the added benefit that the audio they produced carried through to the final mixes. Though a lot of it was ultimately replaced or enhanced by the sound editors, for the first time he said that part’s he’d done did actually make it through to the final movie.

He showed the original edit of the scene, with temp audio, some previz, and extra beats, including Kirk helping a woman that was injured and seeing Pike killed. He talked about coming up with the sounds such as the jump ship hover sound using a variety of other sounds mixed together. He said he has a lot of old sound libraries; “none are that great, but when you put them together you can get some quite good stuff.”

He showed a later edit and then said that when they showed it to J.J. he said he thought the sound was too muddy. “I had this idea that when Kirk runs to the side, the windows are intact, lets make everything subdued and muffled. Maybe there's a way we can play off that?” He then showed a later edit, where the editor decided to remove some of the extra parts in the scene, making it tighter and better.

They spent close to a year on post production on the film.

Questions from the audience:
What traits are needed to be an exceptional first assistant editor? "One thing that's really important is attitude; a friendly personality. An ability to adapt and change to whatever is thrown at you, especially on a big movie, because a lot of things can be thrown at you. You have to know enough technical stuff to be able to do the job."

What jobs helped me brake into the industry? "Nothing!" He PA'd in production first, and didn't like it, then he started as an editing PA. He never went to film school, he learned everything on the job. “Sitting in a class is just not me,” he said, adding “and I know I'm talking to a lot of students here, so I'm sorry.”

He added that he spent a lot of time unemployed, trying to get into feature films. He said he didn't want to work on TV

When the color grade comes back, do you import it back into Avid? Yes. One thing he said that he does is export a QuickTime of the original edit and then he plays that back at 50% over the movie after the corrected files come back, just to make sure nothings been messed up. Doing this he caught a one frame mistake in reel 6; a VFX shot was missing one frame in the middle of the shot.

Julian said he'd like to become an editor, but added “Being an assistant editor, i's a really exciting and challenging job and I couldn't love it more.”
Posted by Michael Murie at 6:30 AM