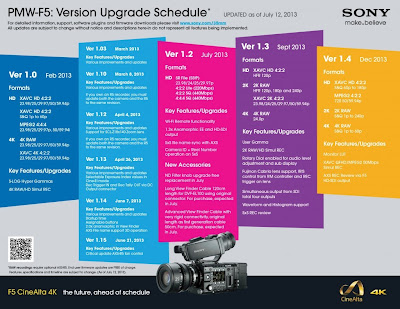 
The F5 will get the ability to record 2K raw at 240fps (with the R5). In addition it will also get 1.3x Anamorphic De-Sqeeze. Sony have just released an updated firmware timeline. There are no major changes to the timing of the already announced features, but now we can see that in the July release the cameras will get Reel Number and Camera ID for SxS recordings.


Highlighting the big update this month is the HD - 10 bit SR Codec, (SR File). This codec has been strongly requested for episodic television and feature film work; since it’s an extremely robust algorithm that is visually lossless (areas of every frame are uncompressed). Also, 220Mbps 4:2:2 and 440Mbps (both 4:2:2 and RGB) result in very manageable file sizes and very easy to decode.


When dealing with Audio in Final Cut Pro, there are two primary filters that help our audio during video work. In this article I’m going to share some tips about them to increase the overall quality and value of your video production, in order of workflow. Remember, audio filters are only used to fix problems.


If you’re on the look out for some free generators, effects, and such for use in FCPX, then this round up of some of the best free downloads available on the net, should satisfy that search.


What strikes me as impressive about the H6 is how easily it could be used in such a variety of applications. The swappable capsule system shows it is an obvious choice for ENG type scenarios, but the H6 can just as easily be used to record live bands; integrate the XLR/TRS input capsule and you have 6 inputs to receive signal from a mixing board. Its USB connection even allows you to use the H6 as an audio interface.


Whilst there’s no doubt that the 5D Mark III overshadows the 50D in terms of raw performance, the 50D completely thrashes the 60D, 70D and Rebel for raw video capabilities and is the best Super 35mm sensor Canon DSLR for raw.


I now have Movcam rigs for my F3, FS700, BMCC and now my F55.  So why am I choosing Movcam over any other brand out there on the market? For me it comes down to the following:  REAL WORLD PERFORMANCE.

BulletProof Beta 2 | Red Giant
The second public beta of BulletProof has been released.


How does the free beta work? The BulletProof beta is here and we want you on our team. Over the next few months, we’re listening to creative professionals who actively shoot, capture and prepare footage for post-production. We're offering you "pre-release" or beta versions of BulletProof, and your feedback will go directly into improving BulletProof.


You've heard the buzz surrounding our newest addition to the Red Giant family—want to get a demonstration of how BulletProof can help simplify your production workflow? Come and see us as we tour the US this summer


You've got a great camera, you've got a great editor; how do you manage everything between them? Join the Red Giant Team and London-based Guru Simon Walker as he demonstrates BulletProof, a complete media prep and delivery solution that simplifies how you handle footage every day.

Protecting Your Data: How to Backup Your Design Files | PSD Tuts+


Different designers and photographers have different workflows and different methods of keeping their work organised. Some may prefer to keep everything on their computer’s internal hard drive while others may be reliant upon external hard drives to store their work. Because of this disparity, what may be the best backup solution for one person might not be any good for somebody else.