The Day After April Fools Day

When I was young - before the internet - you could go through April Fools Day without encountering one joke, trick or jape. Now it seems you're deluged with things...it's just not the same (and by the way, yesterday's piece on the Sony Action Cam was not a joke...maybe I shouldn't have posted it that day.)

Lesson: tech companies should not roll out new products on April 1st.

Hopefully the following are mostly true, though I'm not 100% certain.


NAB 2013 Schedule and “something very special” coming to this blog Part II
| Vincent Laforet | Blog
Vincent posted this on Sunday, so I think I'm safe. He claims he's been working with a "game changer":


I feel the same way about the device that I shot with a few weeks ago – and haven’t felt that way about ANYTHING I’ve seen or shot with since the Canon 5D MKII (The RED Epic is close – the only reason it didn’t make the list was due to the fact that it’s simply not affordable to the amateur market.)   And that’s why I’ve chosen to to repeat the same blog title for only the second time in nearly 5 years for this launch…

But he tells us it's not a camera. He also later confirmed it's not a light, audio, or Final Cut Pro XI. 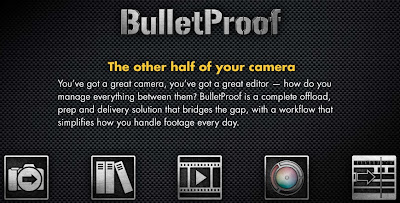 Red Giant BulletProof
Red Giant has pre-announced BulletProof, a tool for managing content from your camera. Sort of like what I thought Adobe Prelude would be, but with a lot of extra bits and pieces.


BulletProof is a complete offload, prep and delivery solution that bridges the gap, with a workflow that simplifies how you handle footage every day. Import, backup, organize, color, deliver: BulletProof has your back at every step. Whether you shoot DSLR or a GoPro, BulletProof lets you focus on your story and get to the editor fast.
Backup Offload Your Files. Select clips from disks/cards, then import into a catalog with backup.
Organize Organize Your Files. View the whole catalog, and sort clips with folders and playlists.
Review Review Your Files. Play individual clips to check their color, quality and consistency.
Color Edit Color & Metadata. Apply first-pass color adjustments and add helpful metadata.
Deliver Deliver Your Files. Queue and export the clips as transcoded project-ready media.


At the moment he’s working on Hero Punk, a full-length feature which was shot using the Blackmagic Cinema Camera. Hero Punk is unusual not just because it’s a low budget indie shot on a $3,000 video camera. Much of it was shot on green screen and the visual effects work is being done by a variety of individual visual effects artists distributed around the globe.


The new Juicedlink BMC366 Low-Noise Preamp has been designed exclusively for use with the Blackmagic Cinema Camera. Launched just prior to NAB, the Preamp is very similar to the RM333 Riggy Micro, except for a few subtle changes.


As part of the on-going feedback process with customers Canon has implemented a revised design in the filter and sensor units of the Cinema EOS System’s EOS C100 and EOS C500 digital cameras that further improves dust prevention performance.
The new design further minimises any possible ingress of dust within the sensor and filter array and, after additional development, the same upgrade can now be performed on all existing purchased EOS C300 cameras and it will be implemented in all future EOS C300 and C300 PL models.


The new Sony F55 from Digital Logic on Vimeo.

This is my blog on how Great Films Could Have Been Made Differently.

if you have time then please take a look.

I'm also looking to collaborate with a screenwriter.