No other camera manufacturer has ever polarized the filmmaking community like RED does. Since its launch, the company has led the way in terms of 4K+ acquisition, while at the same time ignoring standard business practices (e.g. upgrade paths; actual delivery dates). Today, a RED EPIC can be found on sets of big Hollywood feature productions, television, advertising and even low-budget independent films. But why is the EPIC so widely spread?


Jarred Land recently posted that the RED engineers have developed a new smart algorithm for controlling fan speed (and therefore fan noise):
The new algorithm constantly monitors temperature and fan speed and starts quieter than the existing quiet setting for the first few minutes and then slowly steps up fan speed up as temperature increases the longer the take goes..

Color Grading A Glimpse Inside the Mind of Charles Swan III, Part 1: Ryan Bozajian on the Art of the Pre-Grade | Michael Murie | Filmmaker Magazine


Like most motion pictures, Roman Coppola’s latest film, A Glimpse Inside the Mind of Charles Swan III was color graded in a DI theater at a post house. Unlike many films, this final grading only took two days; extensive “pre-grading” was done using Resolve Lite at American Zoetrope’s own facilities, while the final grade was performed at SPY using the full version of Resolve.


“OZ The Great and Powerful” was recently released in theaters nationwide and there’s a lot of buzz about the “look” of the film. Stephen Nakamura, of Company 3. one of the most sought-after DI (digital intermediate) colorists in the industry, is one of the key people responsible for the look of this film. In addition to Oz, his work has been seen on countless features, including Prometheus, Zero Dark Thirtyand the upcoming Spring Breakers, from director Harmony Korine.

Semel Chair David Magee talks about his career 3-14-2013 | Emerson College
David wrote the script for Finding Neverland and Life of Pi, and gave a very interesting talk about how he became a screenwriter, and what it was like to work on these pictures.


The Odyssey 7 will retail for $1295 US – which would be a great price if you were just getting a stand alone OLED monitor – but your getting much more than just a monitor.  The Odyssey 7 is a state of the art external recorder than is capable of supporting a wide range of recording formats...


Camera Companies… Listen UpEducate us on the full eco-system of your cameras and make sure we walk away confident on our next production. Offer us the chance to connect with experts in the field. Give us the satisfaction of knowing that you genuinely care about our success. And if you have a moment to listen about our struggles, do it — it might just be the golden idea in your business model that changes the game for you!

The 10 Commandments of Slating | Evan Luzi | The Black and Blue


I have not owned a terrestrial or cable TV set for 3 years and have no intention in changing. I watch TV via on-demand services online (from major broadcasters) and movies on a home theatre projector, most of which I stream or download in 1080p via iTunes, NetFlix and LoveFilm online. I dislike the way 3D looks and I don’t feel it adds to the emotional immersion of a story. 3D completely removed me [from] The Hobbit and I couldn’t get properly engaged with the characters.

Here we go the end of an era | Rodney Charters | img.ly
FujiFilm is taking last orders.... 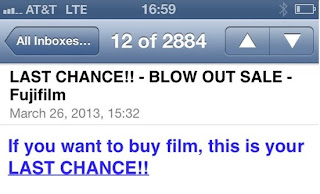 Posted by Michael Murie at 7:20 AM