Yesterday Sony held another webchat on their new PMW-F5 and PMW-F55. Once again, here's a transcript. I just tidied it up; moving the answers next to the questions and deleting any questions that weren't answered. You can find the full transcript on Sony's Facebook page. 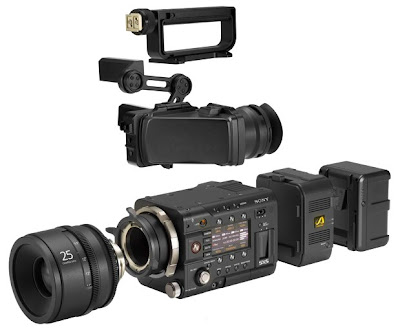 Admin: Hello and welcome to this Cinematographers’ webchat. In this session we will be talking with a panel with hands on experience using the PMW-F55 and the PMW-F5 and finding out how they got on.
Joining us today will be Sony representatives Ainara, Porron, Lucie Wendremaire and Sebastian Leske. Lucile Hadzihalilovic, Director, and Dominique Colin, Cinematographer, join as the team behind the film “Images” shot in XAVC HD on the F5 on location in France.
We are also joined by Steve Lawes, Director, and Martin Scanlan, Cinematographer, of ‘Dig’, a short film shot in 4K on the F55. Dado Valentic from MyTherapy joins to give a colourist’s perspective on working with the F55 footage.

Steve Lawes: I’m Steve Lawes a UK based Director of Photography, with credits on major Network Television Series including the BBC’s critically acclaimed ‘Sherlock’, for which he has received a RTS Craft Nomination and a Bafta Cymru Award, and the multi award-winning ‘Jimmy McGovern’s – The Street’. Steve has worked on international projects for Sky HD and HBO including the feature film ‘Skellig’ and the Action series ‘Strikeback’. Steve’s background was in stills photography, a film school graduate who has worked in the Film, Television and Commercial industry for over 18 years.

Sebastian: Hi. I am Sebastian - product specialist for F5/55.

Q: What tools are available in camera for judging exposure and how effective were they on your shoot?
Steve Lawes: I used s-log 2 to monitor. There are Rec 709 LUT's plus hyper gamma - but I did not use these

Q: Could I ask the panel the thought's on it as an ENG camera?
Martin Scanlan: I think the F5 get used for all kinds of things from Corporates through to low-budget features. My only issue with ENG would be the shallow depth of field, it'll keep you busy keeping focus.

Q: Is there histogram/waveform or false color for exposure?
Steve Lawes: No there is not, but the tech guys from sony said that one may be added

Q: Could the guys who made Dig give us a little more on camera settings they used? Particularly interested in framrate the short was shot at?
Steve Lawes: Frame Rate 23.98. 172.8 shutter

Q: How does skin tones look and the image itself compared to other 4k cameras in its price range?
Steve Lawes: I would say very good

Q: I'm a doc lighting cameraman and, as ever, was most impressed with the 'look' you achieved on 'Dig'. For the 'lit' interiors etc were you able to go with predominantly available light with the F55 ?
Steve Lawes: I did light the interiors but with very small amounts. 2.5 HMI was the biggest daylight lamp - a few 1'x1' LED panels and a Dedo kit

Q: What did you use for exposure? Light meter? or ext. scope? Is there no on-board tools for that? not even zebra?
Steve Lawes: Lightmeter and s-log 2 output to a Oled Monitor

Q: What is the timetable for the planned upgrades?
Sebastian: The first Update which will bring HFR, 2K RAW and some other stuff is scheduled within first half of 2013.
Lucie Wendremaire: 2K RAW will come with firmware version 1.10, free of charge update.

Q: Is the camera easy to use?
Steve Lawes: We had a very prototype software on the camera - other than that it was easy to use
colin dominique: yes the caméra is very easy to use , very simple and very light

Q: So, if I understand correctly, in February, you will only be able to shoot HD internally and for 4K will have to go RAW?
Sebastian: 4K in 60P will be also possible internally for the F55 and 4K RAW as well from day one. ONLY the S&Q 1-60 in 4K will be from VER1.10

Q: Will the new XAVC codec work natively in Premiere, Avid or FCPX?
Lucie Wendremaire: XAVC will be compatible with main NLE partners from End of January on. You will have to install some plug ins for the support but then it will work directly.

Q: Did you do any handheld? Are the ergonomics of the camera pretty good? Steve Lawes: yes the camera is good for hand held
colin dominique: the shoulder mount wasn't ready for the shooting test but the camera is very light and will be very easy on the shoulder

Q: If you used the F55 viewfinder rather than the OLED monitor how good was it and was it good for the few handheld shots in 'Dig'?
Steve Lawes: We shot dig with the new LCD which is good, I saw the new Oled in Poland last week - the one I would buy/Use is the oled

Q: What was your workflow in post with your f5 footage?
colin dominique: the workflow for the f5 was in X AVC 100 , there is a plug in for avid who works well and at the end we do the conformation in TIFF without any problêm

Q: Did you use the 'new shoulder mount' they've been talking about?
Steve Lawes: no, used Arri bas plate and modular bars

Q: Will there be a kind of transfer tool or a AMA plugin?
Lucie Wendremaire: AMA plug in :-)

Q: Does it have regular rosettes for handles?
Sebastian: The Sony shoulder mount will have normal ARRI rosettes, direct usable with 15mm rods and also the V-plate for the camera tripod plat VCT-U14.

Q: What lenses did you use when shooting dig? And did you shoot wide open?
Steve Lawes: we shot on Cooke S4i's. Mostly between T2 and T2.8. Two shots were on the Alura Zooms

Q: Which 2 shots were the Aluras?
Steve Lawes: 2 long shots on the beach, also the tracking shot in the woods at the beginning - so 3 in total :-)

Q: How weatherproof is the F5?
Sebastian: Same as the F3.

Q: Can you tell us a little about Sony's flavour of RAW? For example, how will it be implemented into post workflows? Will it be native or will we need to transcode?
Sebastian: For Adobe for example you just need to install our RAW Plugin and then you can directly use the RAW in CS6. For Baselight, etc it should be the same as for the F65 RAW which is already well established.

Q: A Q on using ENG lenses with a servo zoom. I haven't actually looked but is there a 12 pin connector on the F5? or would ya need external supply to power a servo zoom? That was a big plus for me using the F3 (the zoom rocker)..
Sebastian: There are several ways to use zoom lenses. For the new cabrio the zoom rocker will be powered by the lens interface. For our own Sony zoom lens you need the CBK-DCB01 box which then brings the zoom rocker.
Dominique Colin: Fujinon just launched a new zoom lens that fit perfectly on the F5 for documentary.

Q: Was there anything you ran into "problematic" while shooting dig?
Steve Lawes: The software was glitchy - we would sometimes have to switch the camera off and on again - preproduction software...

Q: Are the new batteries airplane friendly?
Sebastian: They are 75Wh batteries. So I think you will not have probs for the plane.

Q: Do regular Sony or IDX Lith-Ion batteries fit well on the back of the F55 or are they too tall for the camera?
Steve Lawes: IDX fit fine

Q: Which v-mount batteries fit on the f5/55? and is the battery adapter included in the base models without the raw recorder or will it be an extra?
Sebastian: You can use every V-Mount battery. The V-mount plate is in the box. The RAW recorder (Which also have the V-mount connector) is optional accessory.

Q: How is the F5 compared to the F3 as image quality (HD) ?
Lucie Wendremaire: we have not got the chance to do a side by side test until now. The quality image is anyway great for both camera :-).

Q: Did you use any other type lens par from PL? if so how did you find them.
Steve Lawes: Cooke S4i + Alura Zooms - Which I use all the time - great

Q: Can I register 4k from f5
Lucie Wendremaire: You can record 4K RAW with the F5 only with the external recorder R5.

Q: Did you have any IR contamination issues?
Steve Lawes: No IR issues

Q: Were you using the internal ND?
Steve Lawes: yes, plus glass filters for the in between stops

Q: Is the camera ready to shoot right out of the box?
Lucie Wendremaire: in the box, you 'll find the body camera, V-mount plate, XLR Audio box. To be ready to shot you need to choose your viewfinder and lenses, and batteries.

Q: Will there be package deals available with all necessary parts included? i.e - viewfinder, cards, etc?
Lucie Wendremaire: for now there is no such deal planned.

Q: Is the RAW viewer software ready?
Sebastian: The RAW viewer will be ready to support F5/55 RAW when the cameras will be shipped.

Q: When will the new Sony prime lenses be available?
Sebastian: The plan is to have every single piece of the new F-Series (lenses, viewfinder, cards, etc) ready Beg/February.

Q: Is there a peaking function for focus?
Sebastian: Yes will have peaking and zebra.

Q: [What is the] Crop factor of the new lenses?
Sebastian: There is no crop factor because the lenses are developed for S35 sensors which we are using in the F5/55. So 35mm will be 35mm on a S35mm camera.

Admin: All the information about Sony’s Cinematography range is available on the CineAlta hub here: http://www.sony.co.uk/pro/products/digitalmotionpicturecameras
Posted by Michael Murie at 6:30 AM