Completely out of left field, Sony announced a new large-sensor camera; the NEX-EA50. It's a little hard to completely figure this one out and how it will compare to their existing cameras (the NEX-VG20, NEX-FS100 and NEX-FS700.) While it looks like a big upgrade from the NEX-VG20 in that it has XLR inputs and a shoulder-mount design, it doesn't have the ND filters of the FS700, and there's speculation that the image quality will be closer to the VG20 than the FS100/700.

Sony has also come up with a power zoom version of their 18-200 lens. Not the fastest lens around, but for shoulder shooting (and with no ND) maybe you won't be shooting wide-open anyway!

Until the reviews hit, we have to guess; this probably won't effect sales of the FS700 much at all, but even if the image quality isn't quite as good as the FS100, this camera may spell the end of that one.

UPDATE: B & H has it listed at $4,000 with expected delivery of October 15th. That's $999 cheaper than the NEX-FS100 (body only) and the NEX-EA50 price includes the lens. And while it might not be an awesome lens, with the zoom control, it seems like a great combination with this camera. Again, we have to wait and see if the image out of the NEX-EA50 equals the FS100 and also what kind of picture style options it has before writing the FS100 off completely... 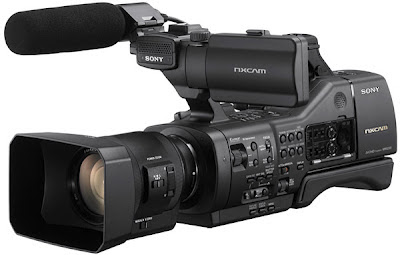 
A shoulder mounted design is something I have wanted to see in an large sensor camcorder for a long time (I know that Ikegami were first but that camera wasn’t exactly cheap). The design means that to work in a run and gun style you don’t need to invest in extra support rigs to get out and shooting.

The two XLR sockets are a huge plus for camera at this price point – adding XLR audio to a DSLR has always been one of the biggest troubles for many shooters.

Sony announces the new NEX-EA50! And a new Power Zoom too!!!! | Sony Rumors


The other very interetsing news is that for the first time Sony released an E-mount 18-200mm F3.5-6.3 OSS Power Zoom!!! It has continuous variable iris and Optical Steady Shot image stabilisation with Active Mode, which should give a more stable shot. lens is electronically controlled via either the zoom rocker lever on the camcorder grip or the top handle, offering either a constant zoom speed or smooth, slow zoom.


Concerns, Rumors, Peanut Gallery:
- If it’s same/similar sensor to NEX5n, it’s probably going to lack the low light capability of the FS100 or 700.
- If it encodes/scales similar to NEX5n, it’s going have less moire and aliasing than 5D2 and 7D, but probably more than FS100/700.