At the recent Three Minute Film Challenge DP Brandon Vincent was documenting the event with a DSLR film camera, and I had to ask him why:


You’re shooting film today. Why are you doing that?
Well, I’ve been meaning too. I found an old, well it’s not super old, but an older film camera that I used back in college. And I figured I'd find some old film, stick it in, and make myself shoot film.

I’m really doing it to make myself more selective. I don’t want to be just popping off pictures, and hope that I get a good shot. I want to make sure that what I’m shooting is exactly what I want, everything’s the way that I want it, and I’m not going to bracket 6 pictures just to make sure I get my exposure right. I want to be as selective as I can and not waste the images, because I’ve only got one roll of film today, it’s 24 frames, I’ve got to make them count.


Two weeks later I checked in with Brandon to see how the pictures turned out.
Unfortunately, the place I used to go is closed now. I'm going to find somewhere else next week hopefully. 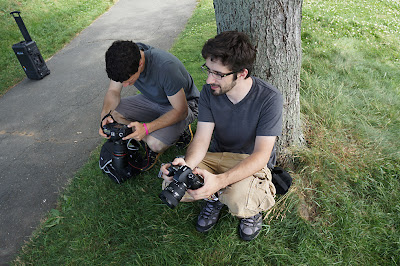 Brandon (right) with his film camera.

Posted by Michael Murie at 9:20 AM