Zoom Q3HD Video Recorder
Looking to improve the quality of your video's audio (though maybe not the video itself?) Zoom has combined what looks like the mics from the H1 with a video camera to create the Q3HD (think of it as the love child of a Flip and an H1 perhaps?) Price is $299, and it's just started shipping. 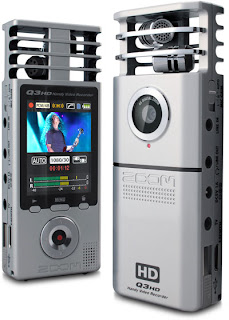 It's an intriguing option perhaps for musicians who want a simple way to make a self video with better audio. I'm just not convinced that to improve the audio you always want the mics on the camera...
Zoom Q3HD: Product Page
B & H: Zoom Q3HD Handy Video Recorder [$299.00]

iPhone as Audio Recorder
Speaking of the Zoom H1 Photo Cine News has a short article about using the iPhone as an audio recorder in place of buying a separate device like the H1. I'm partial to the idea, though the other day I was doing just that - using the iPhone as an audio recorder for an interview - when I got a phone call. Messed up the recording.
Photo Cine News: iPhone Audio Recorder as Zoom Alternative

Panasonic GH2
The GH2 is getting a lot of favorable reaction. EOSHD compares it to the Canon 60D (there's two parts), while at ProLost the expected arrival of the GH2 is greeted with interest, though it's noted that the  "Variable Movie Mode" doesn't really do over- and under-cranking as was first thought.
EOSHD: Canon 60D versus Panasonic GH2 - Full Review - Part 1
ProLost: The Panasonic GH2, DSLRs, and Funky Frame Rates For Creative Effect


Overall I love the idea of the Monitor X, and for those using a lightweight Steadicam Merlin or other stabilizer it is a must have product as it's light enough to balance on these rigs. It's also great when shooting on a tripod at eye level. You can keep both eyes on the event, using the Motion-X to help keep accurate framing and focus. I also love that JAG35 included two 1/4-20" mounts, allowing you to use it with articulating arms when used with a Cage or Shoulder rig. I hope that JAG35 takes it one step further by adding an anti-glare coating. 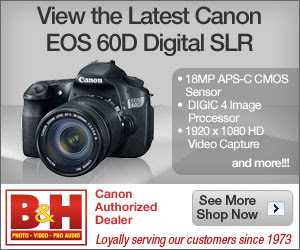 Posted by Michael Murie at 8:30 AM