A few weeks ago I attended the Public Television Quality Group's Boston Workshop. This two day event covered everything from shooting and editing to delivering the program to PBS. But you didn't have to be a PBS producer to get something out of this experience. 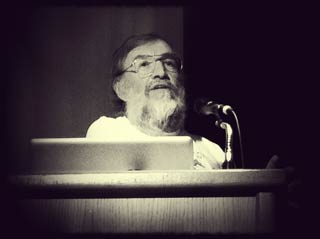 Emmy award winning SMPTE Fellow Mark Schubin started off the event with a presentation entitled: Things You Can and Can't Fix in Post. Beginning with the statement: You can fix anything in post only if you have enough time and money, Mark covered a wide range of topics from lenses to lighting.

He demoed using a polarizing filter to cut reflections, he pointed out that it’s not always a good idea to do filtering during production since most optical filtering can be closely emulated by digital filtering - and he stressed the fact that it's the camera operator that's the most important function in the equation.

Here's some of the themes of the talk:

How do you get to the sharpest sweet spot? You can add or subtract lighting, you can change the gain of the camera, you can go to negative gain on certain cameras if you have too much lighting, You can use the shutter, again if you have too much lighting, that also reduces motion blur but that’s not necessarily so good because it can introduce motion judder. And you can use neutral density filtering, but one of the things you have to watch out for is possible glass flaws...

There are different types of resolution:

Sharpness is tremendously dependent upon the amount of contrast that you are getting.

When you buy a camera that has a 2/3” imager […] absolutely nothing in the camera is 2/3” The reason that we call it that is that back in the old days when we had tubes, and the tubes were round, we measured the tubes by the outside diameter, so in a 2/3” tube, the tube was 2/3 of an inch around, that’s 17mm, but the target area on the tube was only 11mm […] which is less than 1/2 inch.

Going to a smaller lens format means you need a better lens.

To sum up: Acquisition affects everything that follows, so problems should be fixed there. Operator actions effect picture more than most camera characteristics Sharpness is affected by contrast as well as resolution And contrast is affected by diffraction and lenses.


I as Mark Schubin don’t have special privileges and everything that I’m involved in is three chip. I am not doing any single-chip stuff for PBS. As for the other stuff, I would refer you to the TOS session and maybe you can raise that, and I think it’s a good point to be raised... and on the QT, they probably can’t tell. So I’d say if you’ve shot single sensor, you don’t have to tell them