More on the Sony PMW-F3

VFX Supervisor and friend-of-the-blog Dermot Shane was invited to one of the special events Sony held yesterday to unveil the PMW-F3, and sends along his thoughts. He notes that Sony would not talk on or off the record about final pricing (though Studio Daily claims Sony said at a presentation that it would be $16,000 for the body and $23,000 for the kit.)

At 20K it's in a class of one once it has dual link output, until then - the question is why bother?

I think they may have given Panicsonic an open playing field for the Indie filmakers though, they seem pretty under impressed. 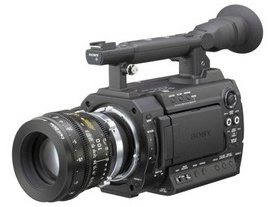 
The F3 is scheduled to ship in February 2011 at $16,000 for the body only or at $23,000 for a kit that includes three Sony-branded T2.0 PL-mount prime lenses at 35mm, 50mm, and 85mm. Sony is formally introducing it with film-school-oriented launch events this month at USC in Los Angeles and next month at NYU in New York City.


FXGuide takes a look at the camera and writes:


Who should buy one?
Documentarians especially those doing interviews, - and who want outstanding image quality, far less restricted running times, no overheating problems and who perhaps grew up on the P2 form factor and need audio handled on camera.