VideoQ&A: Which camera should I buy?

The question; which camera to buy? often comes up. Unfortunately, there is no one perfect answer to the question.  One prospective buyer had the following specific set of requirements, starting with good low-light performance:
First, an assumption; when shooting "outdoors at night" I'm assuming we're talking about outside in the city where there is a good amount of street lights.

In those conditions, I’d recommend looking at either the Canon HFS 20 (~ $900) or the Sony HDR-CX500V (~ $800 with rebate through 7/31/2010.) Both Sony and Canon introduced new sensor designs a couple of years ago that significantly improved low light performance. These two cameras aren’t the latest iterations of either company’s products, but I don’t think the latest models are significantly better. 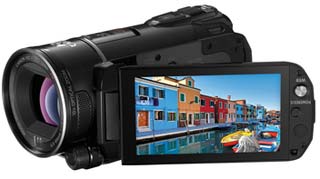 Canon HFS 20
Another possible choice would be a digital SLR. For about $1000, you could get a Canon T2i and a couple of inexpensive lenses. This camera does incredibly well in low light, BUT I’d be wary of recommending it for the casual user. Focusing is manual once you’re shooting, and that makes things much more difficult for the user.

While the Canon T2i may do better in low light, I think the HFS 20 and HDR-CX500V are as good as you’ll get in low-light for a consumer camcorder under $1,000. I have a Sony HDR-XR500 (a two-year old camera), and I’ve used it to shoot bands in low light situations in bars, and it’s pretty amazing.

MEMORY
Both of the above cameras record to flash memory cards, though they also include 32GB of built-in memory, which translates to about 3 hours recording at the best quality. Alternatively you could buy a Sony camera with a hard drive, like the HDR-XR350V, which would give you 160GB for $999. BUT, I don’t know if I'd recommend a camcorder with a large hard drive to most people. A camera with that amount of memory just encourages the casual user to adopt a bad habit; recording and leaving the video on the camera. While it’s a great convenience when you start out, one day either a) the hard drive is full or b) the hard drive/camera breaks…and then what do you do?

So if you’re going to record to memory (rather than tape or DVD) then you will one day have to start managing these video files with your computer….if only to find a way to make copies and backup the video. I think it’s a little easier to start doing that with 32GB, than a month or so later with 160GB!!

As an aside, tape and DVD recording have both been pretty much abandoned for HD recording. While they were very convenient for the casual user, it doesn’t seem to be where the future is heading. 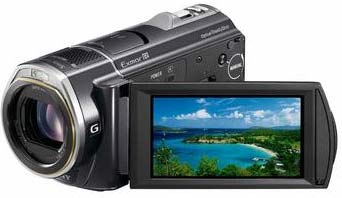 Sony HDR-CX500V
PLAYBACK
Finally, you might need to think about how you’re going to play back the video once you have recorded it. You can, of course, play it from the camera, but that means keeping the video on the camera (or on memory cards) and keeping the camera connected to your TV.

You might look at something like the Western Digital WD TV Live. For $99, you get a a box that connects to the TV and will play back video files. Just place the video on a USB hard drive, and connect the drive to the WD Live box.

All you need to do is copy the video from the camera to a portable USB drive, and then connect the USB drive to the WD Live for playback. AND, don’t forget to make a second backup copy of the files on a second hard drive or DVD!