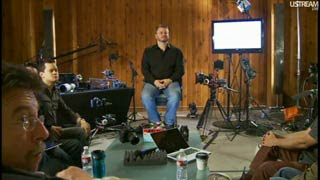 This past weekend, Vincent Laforet spent 3 days giving an HDDSLR cinema workshop hosted by creativeLIVE. You could watch it for free, or if you missed it, you can "purchase" a copy for $129 (it was $79 up until the end of the course.) The format was pretty simple; Vincent in a room with about eight students, lecturing, demoing and also having them do things while it was all beamed out on the internet.

I managed to catch a few hours here and there through the weekend, and it actually looked to be a really informative event. Unfortunately, several times the video dropped out; at one point I was "listening" to an explanation of using Apple Color, and you really need to see that! When it worked - and they had several thousand people viewing at once most of the time - the video and sound quality was very good, so the recorded program should be great.

If you're just starting out making videos - even if you aren't interested in HDDSLR movie making - you'd learn a lot from this class, as about 80% or more related to the equipment, software and techniques that apply to working with any video/film camera.

A couple of things that stood out for me; it's clear that Vincent doesn't believe in hand holding HDSLR's unless you're looking for a specific effect, or are constrained by space. Put it on a tripod, a mount or a steadicam seems to be his mantra. He isn't that enthused by shoulder rigs either. While giving a demonstration of Final Cut Pro, and talking about editing together a program and dealing with poor or missing footage, Ed - I missed his last name - the video editor observed that sometimes "Done is good".